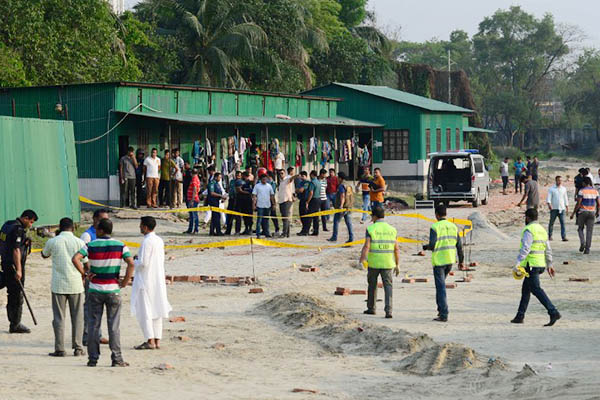 The Islamic State claimed responsibility on Saturday for a suicide bomb attack on a Bangladesh security forces camp, while police in Dhaka shot dead a suspected militant in a separate incident.

The Bangladeshi government has repeatedly denied the presence of I.S. in the country, blaming attacks on local extremists. “A caliphate soldier in Bangladesh carried out a martyrdom operation with an explosive belt in a camp for special forces in Dhaka,” I.S. announced in its daily al-Bayan radio bulletin on Saturday.

Two policemen were wounded in the apparently botched attack on Friday when a man blew himself up at an elite forces camp near Dhaka’s international airport. The camp attacked was occupied by the Rapid Action Battalion (RAB), an elite force tasked with combatting militancy.

Asked about I.S.’s claim of responsibility, RAB spokesman Mufti Mahmud Khan told AFP: “I.S. has no presence in Bangladesh at all.”

The Islamic State group claimed responsibility for a major attack on a Dhaka café last year in which 22 people, including 18 foreign hostages, were killed. The Bangladeshi government however has said a new faction of homegrown extremist group Jamayetul Mujahideen Bangladesh (JMB) was behind that and other attacks.

Critics accuse Prime Minister Sheikh Hasina’s secular government of using the spate of attacks in the country to demonize her domestic opponents.

On Saturday a man on a motorbike tried to cross a RAB security roadblock in Dhaka carrying a bag with improvised explosive devices. Bangladesh police shot the suspected militant dead, Khan said.

“As he was carrying explosives we primarily suspect him of being a militant,” Khan told AFP, adding further investigation was needed to ascertain his identity.

Friday’s bomb attack was one of the first in recent years against the elite RAB force, which has led a nationwide crackdown on Islamist extremists, arresting scores of suspects. Police have this month also been carrying out a series of raids in the southern Chittagong region and say they killed four suspected militants when they stormed an extremist hideout on Thursday.

Former U.S. Secretary of State John Kerry said last year there was evidence to link extremists behind attacks in Bangladesh to I.S. “There is the ideological footprint of I.S. in Bangladesh, there is no denial about it,” said Shahab Enam Khan, a terrorism expert at Jahangirnagar University. “However, we have not received enough evidence of their physical existence in concrete organizational form in the country yet.”