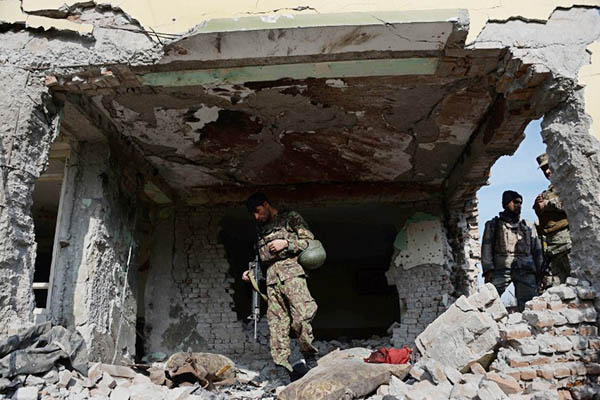 Seven Afghan soldiers killed in four-hour assault that was preceded by a suicide attack.

The Islamic State group claimed responsibility for the attack, which comes after a series of strikes on Indian installations in the region and amid an unprecedented Taliban campaign of winter violence. In an Arabic statement released via Twitter, the group said the attack was carried out by three Islamic State fighters, two of whom blew themselves up by detonating explosive belts.

The brazen assault sent terrified young students in an adjacent school fleeing the area, which is also close to the Indian diplomatic mission. “Seven of our security forces were killed and seven others wounded as a result of the terrorist attack,” interior ministry spokesman Sediq Sediqqi said on Twitter four hours after the attack started.

Afghan troops killed all gunmen holed up in an empty government guesthouse near the consulate, where they had traded heavy gunfire with soldiers after a suicide bombing in the area, officials said.

Pakistan’s foreign office said in a statement it was in contact with its embassy in Kabul as well as Afghan officials, but could offer no further information.

Indian interests have been targeted twice this month in spectacular assaults—an attack on the consulate in Mazar-i-Sharif, and a raid by Islamist insurgents on an air force base in the northern Indian state of Punjab. A small bomb also exploded near the Indian consulate in Jalalabad last Tuesday, but no casualties were reported.

The spike in violence came in the wake of Indian Prime Minister Narendra Modi’s surprise visit to Pakistan last month, after the rivals announced they would resume high-level peace talks.

India has been a key supporter of Kabul’s post-Taliban government, and analysts have often pointed to the threat of a “proxy war” in Afghanistan between India and Pakistan.

This week representatives of Afghanistan, Pakistan, the United States and China met in a bid to revive stalled Taliban peace talks. The so-called “roadmap” talks were meant to lay the groundwork for direct dialogue between the Afghan government and the Islamists. The four-country group is set to hold the next round of discussions on Jan. 18 in Kabul.

The Taliban’s nationwide winter offensive is testing the capacity of Afghanistan’s overstretched military and putting pressure on Pakistan to rein in its one-time proxies. In September the Taliban briefly seized the northern provincial capital of Kunduz, and in recent weeks they have seized large swathes of the key opium-rich district of Sangin in the southern province of Helmand, their traditional stronghold. Observers say the intensifying fighting highlights a push by the militants to gain greater concessions during any future direct talks.