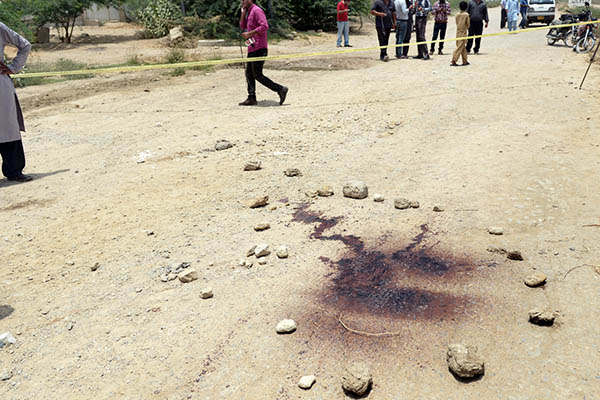 Attack on Ismaili community in Karachi points to growing influence of militant group.

Investigators probing the first attack claimed in Pakistan by the Islamic State group believe a notorious local sectarian group may have carried out the massacre as it seeks to expand its ties to the Middle East.

Gunmen stormed a bus in Karachi last month, killing 45 members of the Shia Ismaili community in one of the deadliest incidents in Pakistan this year. The slaughter was swiftly claimed by I.S., marking the first time the jihadists, who have seized control of large areas of Iraq and Syria and declared a “caliphate”, said they were behind an attack in Pakistan.

Islamabad has officially denied that I.S. is operating in Pakistan, which has been wracked by Al Qaeda and Taliban linked violence for more than a decade. But investigators believe the attack may have been carried out by the Sunni militant group Lashkar-e-Jhangvi (LeJ) as it seeks to expand its international influence—and get access to I.S.’s rich funding.

LeJ has emerged as the bloodiest and most ruthless anti-Shia outfit in Pakistan, which has seen a rise in sectarian attacks in recent years, mostly targeting Shias, who make up 20 percent of the population. “We are investigating the LeJ connection behind the attack and one of the arrested suspects is linked to LeJ,” said a security official involved in the probe on condition of anonymity. “LeJ wanted to gain attention of I.S. for its financial needs and the attack on Ismailis provided the perfect choice as it got international attention.”

Senior intelligence officials and militant sources say LeJ cadres have fought in Syria and returned inspired by I.S., which has won global notoriety for its brutality and slick propaganda operation. The returned fighters are working with a new generation of middle-class, educated, self-radicalized jihadists to try to raise the black flag of the I.S. “caliphate” in Pakistan.

An intelligence officer who has tracked LeJ for years said the group, based in the southern part of Punjab province, had sent hundreds of fighters to Syria. “The new cadre of militants going to Syria and Iraq, these militants are mostly educated people with middle-class backgrounds,” he said.

Over the past decade the patchwork of militant groups that make up the Pakistani Taliban have largely focused on waging a domestic campaign against the government and armed forces. But a former LeJ militant who produces online propaganda material for terror groups said for young militants in Pakistan, all the talk now is of I.S. and the Middle East. “Many jihadists particularly from Punjab went to fight in Syria and some were martyred,” he said. “Unlike the past, news from Syria, Iraq and Yemen is the most debated and shared item on jihadist forums in Pakistan.”

Security analyst Amir Rana said LeJ had had fighters in Iraq since 2013, and even set up a training camp there. “The ideological and operational association between Pakistani militant groups and ISIS is not new, Pakistani militants were part of I.S. since its inception,” he said. “The actual threat for Pakistan is the return of LeJ militants fighting in Iraq and Syria, as they would add to the sectarian violence here.”

LeJ, founded in 1996, was behind some of the worst attacks on Shias in Pakistan’s history, including two huge bombings in Quetta in 2013 that together killed nearly 200 people. The security official said the group was now seeking to expand its operations.

The group has been accused of carrying out attacks in Afghanistan and has also begun targeting Christians, Hindus and other Muslim minorities. “For the last two years, there is evidence that the organization is involved in attacking minorities in urban centers where they have established strong bases, especially in Karachi,” he said. “But LeJ has claimed responsibility for hardly any of those incidents—usually militant organizations with no structural or organizational existence have claimed responsibility for attacks carried out by LeJ,” he added.

He said LeJ maintained a strict cellular structure, with individuals in one unit unaware of the existence of others, and sometimes drew militants from other groups for specific missions.

On May 20, Sindh Chief Minister Qaim Ali Shah announced the first arrests in connection with the Karachi bus attack. He said four “highly educated” suspects had confessed their involvement, including a graduate of the city’s prestigious Institute of Business Administration.

The detentions of the alleged plotters, who police believe coordinated the gunmen on the ground, caused some surprise in Pakistan, where militancy has been regarded as the preserve of the poor. But the arrests come as no surprise for officials investigating the case. The intelligence official overseeing the Karachi investigation said the abundance of jihadist literature on the web was attracting educated people from the middle class.

Another senior intelligence official said people with strong academic backgrounds were being increasingly radicalized following the Syrian conflict. “These ‘educated jihadists’ are embedded in society, they have normal lives and keep their ideologies alive through the Internet—that’s why it is difficult to place tabs on them,” he said.