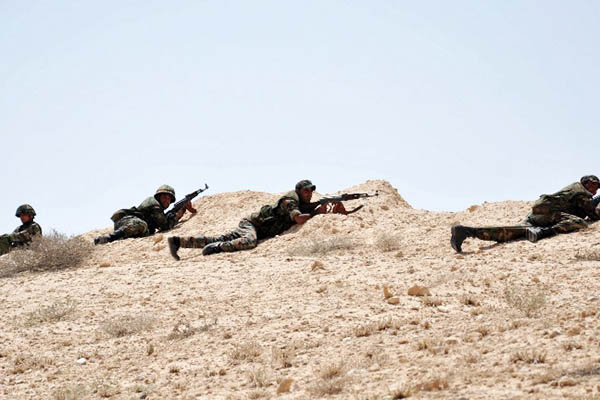 Hasakeh may fall to the militant group despite regime air raids on their positions.

The extremist Islamic State group fought fierce battles Friday with Syria’s armed forces in a bid to seize control of Hasakeh, a key provincial capital in the country’s northeast.

“Fierce clashes continued Friday between regime forces and I.S. south of Hasakeh city. The regime is violently and intensely bombarding jihadist positions from the air,” the Syrian Observatory for Human Rights said. The Britain-based monitor said the regime was using barrel bombs—large containers packed with explosives—against jihadists edging toward the city, which is divided between Kurdish and government control.

Since their offensive began on May 30, I.S. fighters have advanced to the southern outskirts of Hasakeh using deadly suicide attacks and heavy mortar fire. Citing a military source, Syria’s state news agency SANA said the army had used “aerial weapons… to destroy equipment belonging to the I.S. terrorists.”

The seven-day assault has killed at least 71 government loyalists and 59 extremists, including 11 who drove car bombs—I.S.’s signature weapon—toward regime positions, the Observatory said.

The jihadists, who have expanded their control in central and eastern Syria and in neighboring Iraq, seized a number of key posts, including a prison and power plant. Hasakeh has since been without power, local activist Arin Shekhmos told AFP.

Kurdish militia, locked in battles with I.S. in other parts of Hasakeh province, has yet to take part in the clashes south of the city. “For the moment, the Kurds are not taking part in the fight as the battles have not reached their area,” Abdel Rahman said. Al-Watan, a Syrian daily close to the government, has criticized Kurdish militia for not coming to the army’s aid.

The loss of the city would follow a string of defeats in major cities for Syrian President Bashar al-Assad, including the ancient site of Palmyra last month and the northwest provincial capital of Idlib in March. It would also be the second provincial capital to fall to I.S. after Raqa, which jihadists declared the capital of their self-styled “caliphate” last year.