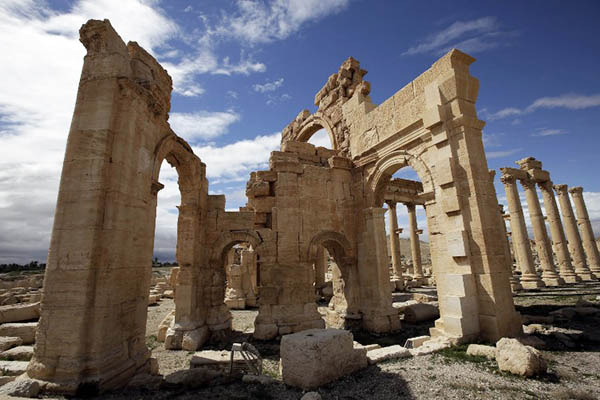 Islamic State militants on Sunday blew up the ancient temple of Baal Shamin in the UNESCO-listed Syrian city of Palmyra, an official said, the latest in a series of cultural relics to be destroyed by the jihadist group.

Famed for well-preserved Greco-Roman ruins, Palmyra was seized from government forces in May, fuelling fears the I.S. jihadists might destroy its priceless heritage as it had done in other parts of Syria and Iraq.

Until Sunday, most of Palmyra’s most famous sites had been left intact, though there were reports I.S. had mined them and the group reportedly destroyed a famous statue of a lion outside the city’s museum.

“Daesh placed a large quantity of explosives in the temple of Baal Shamin today and then blew it up causing much damage to the temple,” Syria’s antiquities chief Maamoun Abdulkarim told AFP. “The cella [inner area of the temple] was destroyed and the columns around collapsed,” he said.

The Syrian Observatory for Human Rights, a Britain-based group that monitors the country’s civil war, confirmed the destruction of the temple.

I.S., which controls swathes of Syria and neighboring Iraq, captured Palmyra on May 21, sparking international concern about the fate of the heritage site described by UNESCO as of “outstanding universal value.”

Baal Shamin was built in 17 A.D. and it was expanded under the reign of Roman emperor Hadrian in 130 A.D. Known as the “Pearl of the desert,” Palmyra, which means City of Palms, is a well-preserved oasis. Its name first appeared on a tablet in the 19th century B.C. as a stopping point for caravans travelling on the Silk Road and between the Gulf and the Mediterranean.

But it was during the Roman Empire—beginning in the first century B.C. and lasting another 400 years—that Palmyra rose to prominence.

Before the arrival of Christianity in the second century, Palmyra worshipped the trinity of the Babylonian god Bel, as well Yarhibol (the sun) and Aglibol (the moon).

Prior to the outbreak of the Syrian conflict in March 2011, more than 150,000 tourists visited Palmyra every year, admiring its beautiful statues, over 1,000 columns, and formidable necropolis of over 500 tombs. I.S. had mined the ancient site in June before destroying the Lion Statue of Athena—a unique piece made of limestone that stood more than three meters high outside a museum.

Funerary busts were also destroyed by I.S. in Palmyra.

Most of the pieces in the museum were evacuated by antiquities staff before I.S. arrived, though the group has blown up several historic Muslim graves.

I.S.’s harsh version of Islam considers statues and grave markers to be idolatrous, and the group has destroyed antiquities and heritage sites in territory under its control in Syria and Iraq. The latest developments come just days after I.S. jihadists beheaded the 82-year-old retired chief archaeologist of Palmyra.

IS has also executed hundreds of people in the city and surrounding area, many of them government employees, and infamously used child members to shoot dead 25 Syrian government soldiers in Palmyra’s ancient amphitheater.

In neighboring Iraq, where I.S. also controls a swathe of territory, the jihadist group has razed some ancient Mesopotamia’s relics and looted others to sell artifacts on the black market. In February, it released a video showing militants using sledgehammers to smash statues in the country’s second city Mosul, and the group’s fighters have also burned thousands of rare books and manuscripts, and destroyed several other landmarks.