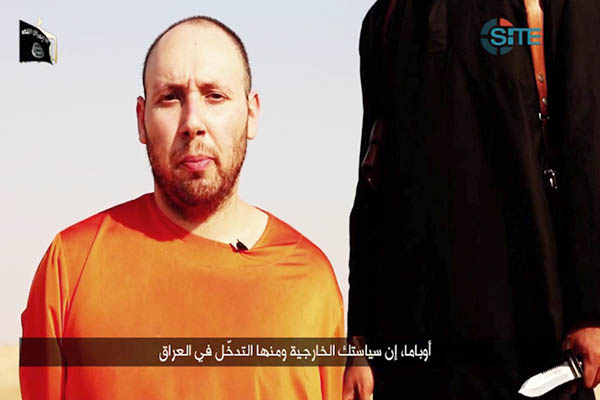 A video released on Tuesday shows a masked militant cutting the throat of Steven Sotloff.

Islamic State terrorists have murdered a second American reporter, releasing another video Tuesday showing a masked militant with a British accent cutting the throat of a U.S. captive.

In the latest footage, 31-year-old reporter Steven Sotloff calmly addresses the camera to say he is a victim of President Barack Obama’s decision to press on with airstrikes in Iraq against the jihadists. Obama later Tuesday authorized 350 additional American troops to beef up security at U.S. diplomatic facilities and protect personnel in Baghdad.

At the end of the five-minute video recording, discovered online by the SITE terrorism monitoring group and seen by AFP, the militant threatens another captive, identified as British citizen David Cawthorne Haines.

“I’m back, Obama, and I’m back because of your arrogant foreign policy toward the Islamic State,” the black-clad militant says, wielding a combat knife and speaking in a London accent. This was a reference to a video issued last month in which U.S. journalist James Foley was murdered, again by a suspected British foreign fighter, and in almost identical fashion.

The fighter condemned recent U.S. airstrikes on the area around the Mosul Dam in Iraq, dating the footage after the 40-year-old Foley’s killing. “So just as your missiles continue to strike the necks of our people, our knife will continue to strike the necks of your people,” he declared, before reaching round to cut his captive’s throat. Sotloff’s hair and beard were longer than in previous IS footage, in which he was threatened with death in retaliation for U.S. strikes against the extremist group, which has declared an Islamic “caliphate” in regions under its control in Iraq and Syria.

In a warning to Britain, the killer declared: “We take this opportunity to warn those governments that enter this evil alliance of America against the Islamic State to back off and leave our people alone.”

The Sotloff family, who live in Miami, issued a statement through a spokesman, Barak Barfi, that implicitly confirmed the video as authentic. “The family knows of this horrific tragedy and is grieving privately. There will be no public comment from the family during this difficult time,” it said.

After Foley’s death, Sotloff’s mother Shirley had addressed a video message to IS leader Abu Bakr al-Baghdadi pleading for her son’s life, and insisting he had no influence on U.S. policy. A U.S. spokeswoman said Washington was trying to authenticate the “sickening” footage, and British Prime Minister David Cameron said it depicted an “absolutely disgusting, despicable act.”

Sotloff’s former employers at Time and Foreign Policy paid tribute to a man widely respected for his intrepid reporting in Syria and the wider region, including a previous stint in Libya. A piece Sotloff had once written from a besieged rebel enclave in the Syrian city of Aleppo was shared by Foreign Policy’s Middle East editor David Kenner on Twitter, dubbing the journalist “a brave and talented reporter.”

Speaking in New Zealand, U.N. Secretary General Ban Ki-moon said Wednesday the world was outraged at the apparent beheading. “I strongly condemn all such despicable crimes and I refuse to accept that whole communities can be threatened by atrocities because of who they are or what they believe,” Ban said.

The latest brutal murder, which came on the heels of fresh reports of more IS atrocities against Iraqi and Syrian prisoners, will increase pressure on Obama to toughen his stance against the group. He has promised to be “relentless” in his protection of U.S. citizens in Iraq but admitted last week that Washington does not yet have a strategy to deal with IS in its heartland in eastern Syria.

U.S. airstrikes have continued since Foley’s killing and on Tuesday appeared to bear fruit, as Iraqi forces continued their fightback against the jihadists who have seized much of northern Iraq.

Pentagon Press Secretary Rear Admiral John Kirby said the approximately 350 additional military personnel on the ground in Baghdad would provide security at the Baghdad embassy compound and its support facilities. “This builds upon previous embassy security deployments announced on June 15 and June 30 and will bring the total forces responsible for augmenting diplomatic security in Iraq up to approximately 820,” he said in a statement.

The jihadists have reportedly carried out widespread atrocities. On Tuesday, Amnesty International accused them of war crimes and ethnic cleansing. In June, IS swept through much of the Sunni Arab heartland north of Baghdad and then stormed minority Christian and Yazidi areas.

The extremist faction has carried out beheadings, crucifixions and public stonings, and Amnesty accused it of “war crimes, including mass summary killings and abductions” in areas it controls. Assistance is now arriving in Amerli, brought in both by Shia militia fighters and the United Nations, which said it had “delivered 45 metric tons of life-saving supplies.”