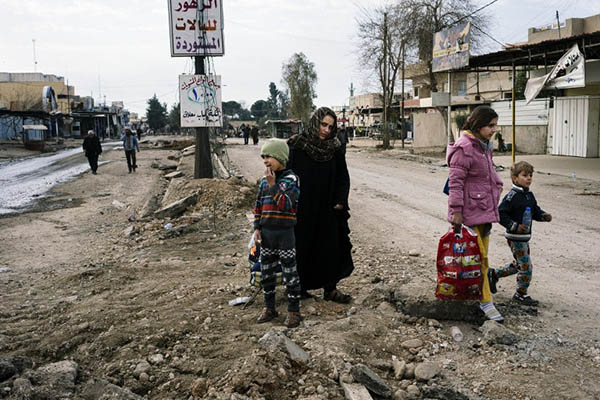 Militant group has deployed troops along Tigris in preparation for cross-river attack.

The Islamic State group expelled civilians from their homes along the Tigris on Mosul’s west bank, apparently bracing for a cross-river attack on their bastion by Iraqi forces, residents said on Monday.

“The group forced us to leave our homes… without allowing us to take our belongings,” a resident of Al-Maidan, a neighborhood on the city’s jihadist-held west bank, told AFP. “It deployed gun positions and posted snipers on roofs and at windows,” the resident said, speaking on condition of anonymity for fear of reprisal by the I.S. gunmen ruling his neighborhood. “We were forced to leave the area because it will become a battlefield and so we moved in with relatives in other parts of the city,” he said.

Iraqi forces have all but completed their conquest of Mosul’s east bank and commanders are turning their sights to the western side of the city, which is expected to see bitter street battles.

The Joint Operations Command coordinating the fight against I.S. said on Monday that federal forces moved into Rashidiyah, an area on the northern edge and east bank of Mosul still held by I.S.

Sufian al-Mashhadani, a civil society activist from Mosul, confirmed that the jihadist organization had deployed fighters in buildings along the west bank’s riverfront. “Daesh prevented the inhabitants and owners of those homes and shops from taking their belongings and their food, claiming those were now the property of the mujahideen,” he said.

All the bridges above the Tigris in central Mosul have been either bombed by I.S. or dropped in airstrikes by the U.S.-led coalition.

Mosul residents who lived on the eastern side but owned property or businesses on the west bank have seen their homes and shops seized by I.S. in recent days, said Abdulkarim al-Obeidi, another civil activist. He said others have been expelled on the grounds that they did not have valid permits and licenses.

“Daesh has been distributing those confiscated shops and homes to its fighters on the west bank, especially since their financial resources started decreasing sharply,” Obeidi said.

Iraqi forces launched the offensive to retake Mosul, the jihadists’ last major urban hub in Iraq, on Oct. 17. I.S. fighters on the city’s west bank are almost completely surrounded and will be largely unable to resupply but the narrow streets of the old city will make for a lethal terrain when federal forces move in.

Baghdad’s top fighting units have taken casualties in more than three months of what is Iraq’s largest military operation in years. Some of them will redeploy to areas south, north and west of the city, while others could attempt to throw bridges across the Tigris to attack from recently retaken areas on the east bank.

“The Iraqi forces have over the course of their battle against Daesh in this country developed the capability to do bridging, including bridging while under fire,” Colonel John Dorrian, spokesman for the U.S.-led coalition supporting the war on I.S., said. “U.S. combat engineers have trained ISF engineer units on combat bridging, which the ISF successfully deployed in Ramadi and Qayyarah,” said Patrick Martin, Iraq analyst with the Institute for the Study of War.

He was referring respectively to the capital of the western province of Anbar that Iraqi forces retook a year ago, and to a town south of Mosul.

According to the coalition, I.S. has lost around two thirds of the territory it once controlled in Iraq and the recapture of Mosul by federal forces would effectively end its days as a land-holding force in the country. The battle to retake Mosul’s west bank is expected to be long and difficult however and several observers argue that Prime Minister Haider al-Abadi’s latest timetable that gave his forces three months at the new year to rid the country of I.S. was optimistic.