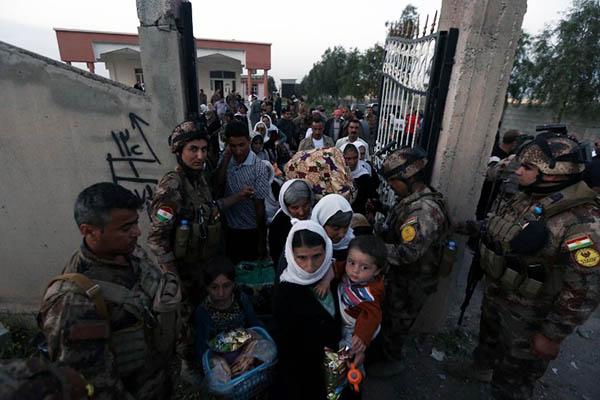 Kurdish commander says the hostages were released after negotiations with tribal sheikhs in I.S.-controlled territory.

More than 200 mostly elderly members of Iraq’s Yazidi minority were freed by the Islamic State group after eight months in captivity and crossed Wednesday to the safety of Kurdistan.

“We have received 227 Yazidis, among them women and children” in the northern province of Kirkuk Wednesday, said Major General Westa Rasul of the Kurdish peshmerga forces. “We negotiated for days with tribal sheikhs in Hawijah and were able to free the kidnapped Yazidis,” Rasul said, referring to an I.S.-controlled town in Kirkuk.

The Yazidis were actually freed Monday in Nineveh province, northwest of Kirkuk, but did not make their way to a Kurdish-controlled territory until two days later. The mass release of the Yazidis, kidnapped in Nineveh last year, is the second of its kind, after some 200 mainly elderly people were set free in January.

A sweeping I.S. offensive overran large areas north and west of Baghdad last June. A second drive in August targeted areas in the north that were home to many of Iraq’s minorities. The group, that crossed back to safety Wednesday, including many elderly and disabled people, was driven back to the Kurdish city of Dohuk after a stop in the Yazidi holy town of Lalish.

Many had harrowing tales of the day in August last year when their heartland in the Sinjar region was attacked, of how they were forced to convert to Islam.

Ghazal Khalaf, a 25-year-old woman with a disability in her left leg, was separated from her seven-year-old daughter during her captivity. “They told me to leave with those old people but I refused to leave without both my children,” she said, cradling a two-year-old in her lap.

She said she insisted and eventually got her daughter back when she paid I.S. militants $20,000 her brother in Dohuk was able to send via middlemen.

Ahlam Qassem has six children but only left with the three youngest. Her two teenage daughters and 10-year-old boy stayed behind. “I asked them many times to return my children, they took them from my arms and refused to bring them back. I don’t know their fate,” the 35-year-old mother said.

The Yazidis, who are neither Muslims nor Arabs, practice a unique faith and are considered infidels by the jihadists. They were hit harder than others. They looked in danger of being wiped out of their ancestral land until a U.S.-led air campaign turned the tide on I.S. advances in northern Iraq.

The U.N. has said the I.S. campaign of killings, abductions and rape against Yazidis may amount to genocide.