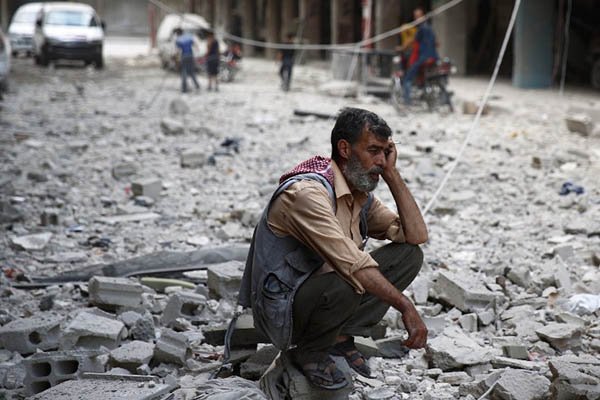 Monitor says latest toll has brought to 3,156 the total number of people killed in Syria since ‘caliphate’ was formed.

The Islamic State group has executed more than 90 people, a third of them civilians, over the past month in areas of war-torn Syria it controls, a monitor said Sunday.

The Syrian Observatory for Human Rights said 32 civilians were among 91 people executed for “crimes” in the jihadist group’s self-proclaimed caliphate between July 29 and Aug. 29. The toll included I.S. members, rebel fighters and forces loyal to President Bashar al-Assad.

Witchcraft, homosexual acts and working with the U.S.-led coalition fighting I.S. in Iraq and Syria are among “crimes” the group punishes with death.

Since it announced its “caliphate” in June 2014, I.S. has swept across Syria, seizing swathes of land in central Hama and Homs provinces, Deir Ezzor and Hasakeh in the east, and the north’s Raqa and Aleppo. According to the Britain-based Observatory, the latest monthly toll has brought to 3,156 people the number of I.S. executions in Syria since the caliphate was announced. The number includes 1,841 civilians.

I.S. has become notorious for its gruesome displays of violence, often shown in videos posted on the Internet, including beheadings, stoning and pushing victims off rooftops. The U.S.-led coalition has been bombarding I.S. in Syria since September 2014.

On Saturday, eight I.S. fighters were killed in a coalition air raid on Raqa, the de facto “capital” of their caliphate. Further west, in Aleppo province, I.S. has been fiercely attacking rebel groups and its jihadist rivals, Al Qaeda affiliate Al-Nusra Front.

Late Saturday, an I.S. car bomb on Tal Rifaat in Aleppo province killed 11 fighters and eight civilians. Tal Rifaat is on a key rebel supply route from the Turkish border to the north. It is near Marea, the main rebel stronghold in Aleppo that has been under fierce I.S. attack for months and is now completely encircled by the jihadists.

On Sunday, 15 civilians—among them six children—were killed in government bombardment of the major rebel bastion of Eastern Ghouta near Damascus, Observatory head Rami Abdel Rahman told AFP. The toll included five civilians in the town of Saqba and three in Hamuriyeh killed in air raids. It also included five civilians killed by shelling in Douma, a rebel-held town devastated by regime attacks.

In Damascus itself, shelling of the Maysat district killed three people and wounded seven, the Observatory said.

More than 240,000 people have been killed in Syria’s conflict, which evolved from a popular anti-government movement to a brutal multi-front civil war.