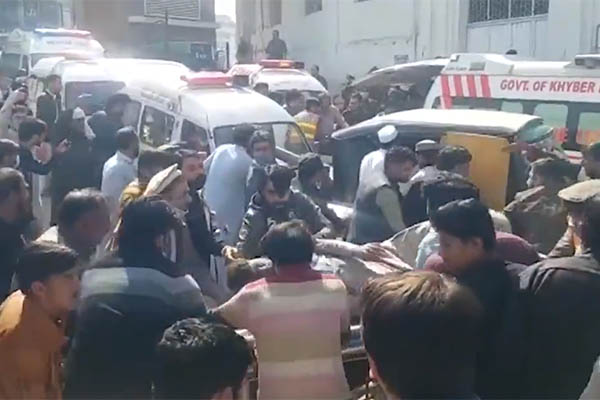 Screengrab of rescue workers transporting injured to hospital in Peshawar

Pakistan P.M. Khan vows to go after terrorists responsible for the attack with ‘full force’

The Islamic State-Khorasan, last on Friday night, claimed responsibility for the bombing of a Shia imambargah in Peshawar that left 63 people dead and nearly 190 others injured earlier that day.

In a statement provided to news agency AFP, the militant group—which is primarily based in Afghanistan—said one of its fighters had been responsible. “Today … an Islamic State fighter succeeded in assaulting a Shia mosque in Peshawar,” read a statement posted on its Amaq propaganda site.

The claim supports views expressed by multiple security officials in the immediate aftermath of the suicide bombing. In media appearances, police especially maintained that the attack had all the “hallmarks” of ISIS.

Prime Minister Imran Khan, in a posting on Twitter, said he had been “personally” monitoring the operations of security officials in the aftermath of the bombing and had been coordinating with the Counter-Terrorism Department and various agencies. “We now have all the information regarding origins of where the terrorists came from and are going after them with full force,” he vowed.

“My deepest condolences go to the victims’ families and prayers for the recovery of the injured,” he said. “I have asked the Khyber-Pakhtunkhwa chief minister to personally visit the families and look after their needs,” he added.

At least 63 congregants lost their lives, with over 185 others injured, after a suicide attacker targeted the Shia mosque in the Qissa Khwani bazaar of Peshawar during Friday prayers. Speaking with journalists at the site of the bombing, Khyber Pakhtunkhwa Inspector-General of Police Moazzam Jah Ansari confirmed that a hawaldar and a police constable had been on duty outside the mosque during the prayers.

“The terrorist was alone and had come to the mosque on foot,” he said. “He targeted the two police personnel stationed at the mosque. One of them embraced martyrdom, while the other sustained injuries,” he said, adding that the extremists had entered the mosque and detonated a suicide vest after targeting the policemen.

He claimed around five to six kilograms of explosives were used in the blast, and over 150 ball bearings had been located during investigations.