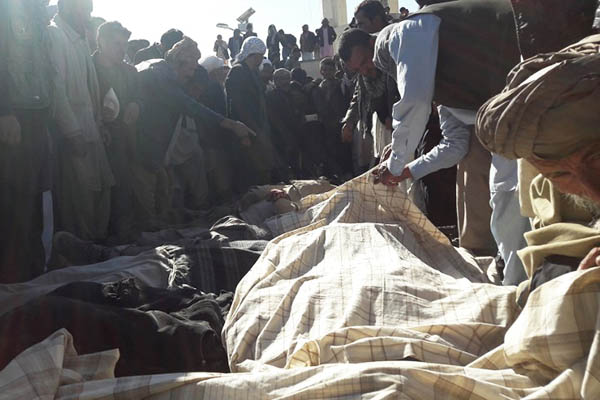 Officials say around 30 people, including children, were targeted by militant group in Ghor province.

Militants linked to Islamic State jihadists abducted and killed around 30 civilians, including children, in central Afghanistan, officials said on Wednesday, raising concerns about the group’s expanding presence beyond its eastern stronghold.

The killings occurred late Tuesday north of Firoz Koh, the capital of Ghor province, with the local government calling it a revenge attack after a local I.S. commander was gunned down. I.S., which controls territory across Syria and Iraq and is making steady inroads in Afghanistan, has so far not officially claimed responsibility for the attack.

“Our security forces with the help of local shepherds conducted an operation and killed a Daesh commander yesterday,” said Ghor Governor Nasir Khazeh. “Daesh fighters in retaliation abducted around 30 villagers, mostly shepherds. Their dead bodies were found this morning.”

Abdul Hameed Nateqi, a Ghor provincial council member, gave a similar account to AFP, adding that the assailants were Taliban renegades who had sworn allegiance to I.S. The U.N. put the death toll at 26, while condemning the “senseless and brutal killings.” It added that the fate of a number of other hostages remained unknown.

The devastating attack represents a major escalation for I.S., which has so far largely been confined to the eastern province of Nangarhar where it is notorious for brutality including beheadings. The killings also underscore Afghanistan’s unraveling security situation as the resurgent Taliban ramp up their 15-year insurgency against the Western-backed government.

I.S. fighters have been trying to expand their presence in Afghanistan, winning over sympathizers, recruiting followers and challenging the Taliban on their own turf, primarily in the country’s east.

In March Afghan President Ashraf Ghani announced that the Islamists had been defeated after local security forces claimed victory in a months-long operation against the group. But I.S. militants have continued to launch deadly strikes in the country.

“[I.S.] announces its emergence in Ghor by murdering dozens of civilians,” said Borhan Osman, a researcher with the Afghanistan Analysts Network in Kabul. Osman added that the I.S. group in Ghor comprised mainly of former Taliban fighters.

Amnesty International denounced the killings as a “horrendous crime.”

“There can be no justification whatsoever for targeting and killing civilians. The victims and their families deserve justice,” Amnesty said, calling for an independent investigation.

The Afghan government is currently in the middle of an operation, backed by NATO airstrikes, against I.S. in Nangarhar. NATO recently said the group’s influence was waning as it steadily lost territory, with fighters largely confined to two or three districts in Nangarhar from around nine in January.

“Right now we see them [I.S.] very focused on trying to establish their caliphate… inside Afghanistan,” John Nicholson, the top U.S. and NATO commander in the country, told reporters on Sunday. “Of course with our Afghan partners we have been able to reduce that territory significantly and inflict heavy casualties on them.”

In July, I.S. jihadists claimed responsibility for twin explosions that ripped through crowds of Shia Hazaras in Kabul, killing at least 85 people and wounding more than 400 others. The bombings marked the deadliest single attack in the Afghan capital since the Taliban were ousted from power in a 2001 U.S.-led invasion. The killings sparked an avalanche of global condemnation, with the United Nations labeling the direct assault on civilians a “war crime.”

The Taliban, who are in the middle of their annual summer offensive and are more powerful than I.S., denied any involvement in the Ghor killings. The militant group, which has stepped up nationwide assaults on the Western-backed government, is known to distance itself from attacks that result in large civilian casualties.