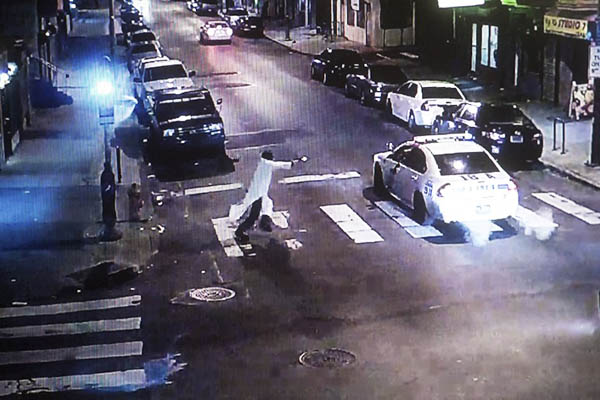 A man claiming allegiance to the Islamic State extremist group shot and seriously wounded a policeman in Philadelphia, opening fire multiple times at point-blank range with a stolen police gun before he was arrested, officials said Friday.

The apparent assassination attempt comes amid heightened security in the United States following last month’s assault by a radicalized Muslim couple in California that killed 14 people, and the November terror attacks in Paris.

Policeman Jesse Hartnett, 33, was shot three times in his left arm as he sat in his patrol car late Thursday. “I’m shot. I’m bleeding heavily,” he yelled in a dispatch call.

Authorities said they were astonished he survived.

Stills captured from video surveillance and released to the press show the suspect opening fire as he walks towards the patrol car, extending his arm into the vehicle and then continuing to fire as he flees on foot. “If that doesn’t just make the hairs on your neck just rise when you see that, it’s scary,” Ross told reporters.

The officer got out of his vehicle, despite being injured, and managed to return fire, hitting the suspect, who was quickly arrested. “He stated that he pledges his allegiance to Islamic State, follows Allah and that is the reason he was called upon to do this,” homicide police Captain James Clark told a news conference.

Police said the suspect, named as Edward Archer, 30, has a criminal record, but that it was unclear whether he acted alone or as part of a wider conspiracy. “He doesn’t appear to be a stupid individual, just an extremely violent one,” said Ross.

Ross, said he was “absolutely amazed” that Hartnett, an officer with five years experience, had survived. “This man fired at least 11 shots from a nine millimeter at close range,” he said.

Police said it was unclear how the suspect obtained the firearm, which was stolen from police in October 2013. “That is one of the things that you absolutely regret the most, that an officer’s gun is stolen and it is used against one of your own,” Ross said.

Philadelphia Mayor Jim Kenney praised Harnett’s bravery but urged people to draw no link between the criminal act and Islam. “That is abhorrent, it’s terrible and it does not represent the religion in any way, shape or form or any of its teachings,” Kenney said. “This is a criminal with a stolen gun trying to kill one of our officers. It has nothing to do with being a Muslim.”

Thursday’s shooting is likely to raise further concerns about the threat posed by homegrown extremists within the United States, inspired to act by I.S. jihadists based in Iraq and Syria. Muslim community activists have already decried what they call an unprecedented anti-Muslim backlash in the wake of the Paris attacks.

Elsewhere on Friday, two suspects with alleged ties to the I.S. group were due to appear in court in California and Texas.

Aws Mohammed Younis al-Jayab, an Iraqi-born Palestinian, was arrested on Thursday and came to the United States from Syria as a refugee in 2012. He is accused of fighting in Syria for various terror groups.

Another Iraqi-born Palestinian, Omar Faraj Saeed Al Hardan, was due to make an initial court appearance after being indicted in Texas for providing material support to the I.S. group.

The head of the FBI, James Comey, told lawmakers last year that upwards of 200 Americans have traveled or attempted to travel to Syria to join I.S.

I am very disappointed in the press conference you gave today regarding the ISLAMIC MUSLIM who attempted to assassinate one of Philly’s finest. I am reprehensibly irritated by your defense of Islam. Your inability to speak the truth disgusts me and Americans everywhere, particularly in Philadelphia.

The Truth About Muslims And Islam

Islam is not a religion but a movement with the purpose of dominating every religion and government.

I knew nothing about Muslims or Islam before the San Bernadino massacre. I thought Islam was a religion and Muslim was a culture. I didn’t judge. I was so upset about this terrorist attack that I decided to look into and research Islam. I read several books, Including “Questioning Islam” and “They Must Be Stopped” (both should be mandatory reading for all politicians.) Then I wasted four days of my life reading the entire Qur’an. The book written by Mohammad (actually dictated by Mohammad due to his illiteracy.)

A paranoid schizophrenic hiding out in a bat cave had a vision of a reptile in human form speaking verbatim “the word of Allah to him.” Mohammad then immediately starts foaming at the mouth and having convulsions because he was just “touched by the Angel Gabriel,” according to his wife. When in all actuality this was a hallucination, seizure or even worse, a demonic possession.

Mohammad then convinces a group of scholars, who should have known better, to write down his insane rants about how “Allah” said this and “Allah” said that. (The Qur’an) When all the while Mohammad was just spewing his perverse desires like child molestation, acts of terrorism, inhumanity and justified murder all in the name of “Allah.”

Because of his paranoid ways, Mohammad feared no one would believe that HE was “Allah’s” chosen ONE. Because of this every other line of the Qur’an is “Mohammad is the great prophet” “Mohammad’s word is gold” “Mohammad can do no wrong.” He also had written on about every page of the Qur’an, “If you don’t believe all these words, Allah will make your life a living hell” AND “If you come across a nonbeliever, you are to terrorize and KILL them.

Thus, Islam was born. You could say Mohammad was the L. Ron Hubbard of his time. Write a crazy book, then base a crazier religion on it. However, (Scientology) “Dianetics” isn’t going to compel radical Scientologists to commit acts of terror and mass murder. I can guarantee you Tom Cruise is not going to behead you or cut off your hands. I promise you Kirstie Alley is not going to blindfold Tom Cruise and John Travolta then push them off a tall building either.

So basically Islam (based on Muslims’ practice of the Qur’an) is a very dangerous Cult. Because most Muslims believe and practice the Qur’an verbatim, Islam should be illegal. All mosques should be closed.

Islam’s purpose is to terrorize and kill the nonbelievers, and world domination. READ A QUR’AN! They have been doing it for 1400 years. Today these Islamic Scum have conquered the Middle East. They have conquered Northwestern Africa. They have invaded Sweden, France, Great Britain and Germany. The rest of Europe is next…then North America. They must be stopped or we will be living in the “United Islamic States of America” with Shari’ah the law of the land by the year 2020! THIS IS NOT “Islamophobia.” This is the REAL Truth.

Muslims have proven themselves to be enemies of Western Civilization and the freedoms it respects by joining a political ideology that seeks to destroy those freedoms and to make all subservient to Islam. Islam has as a fundamental goal…the imposition of Shari’ah law on everyone. This is against the Constitution. Implementing a law such as Shari’ah over the Constitution is an act of treason. Shari’ah law is against all of the freedoms Western Civilization and the United States cherishes and respects.

Since Islam teaches that a Muslim should lie and break agreements with non Muslims these people can not be trusted. They are the source of support for Islamic terrorists. CAIR and the Muslim Brotherhood are radical Islamic sympathizers disguised as players of the “Islamophobia” card. DO NOT LET THESE ORGANIZATIONS BULLY YOU!

“But there are ‘good’ Muslims,” you might say. Yes, these “good” Muslims are the ones that don’t say anything about the BAD Muslims building pipe bombs in their garages. The “good” Muslims also secretly find JOY and great PLEASURE in TERRORIST acts. All in the name of Allah. “Allahu Akbar!”

Please speak the truth in the future. You can never be criticized or bad mouthed for telling the truth.