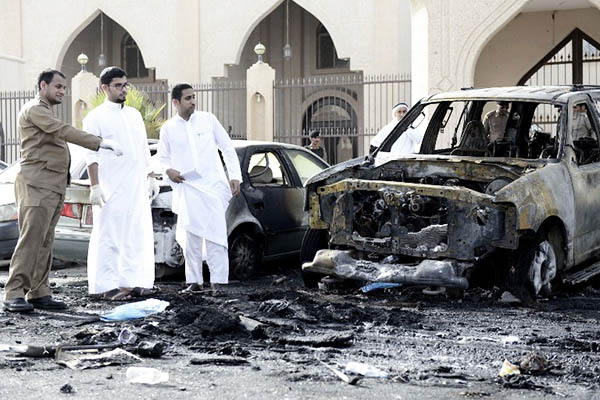 An Islamic State-affiliated group in Saudi Arabia has urged more attacks against Shia Muslims, after I.S. claimed two bomb attacks on mosques in the kingdom.

An I.S. suicide bomber on Friday blew himself up at the entrance to a mosque in Saudi Arabia’s Eastern Province, killing three people, after security volunteers and police prevented him from entering during the weekly prayers. The attack came exactly seven days after the jihadist group struck another Shia mosque in the oil-rich region.

The Najd Province, which claimed both bombings, defended attacks on Shias and said they should be “killed everywhere,” in an audio message posted online late Friday. The jihadist group “has ordered its soldiers everywhere to kill the enemies of religion, especially [Shias],” a spokesman is heard saying in the audio message. The unidentified speaker said Shias were “apostates,” adding: “it is our duty to kill and displace them… wherever they may be.”

Four people were also wounded in Friday’s attack in Dammam, which coincided with weekly prayers. The attack sparked widespread condemnation.

The United States denounced the “brutality of the terrorists” and said it was committed to working with Saudi Arabia to fight extremism. “We deplore the brutality of the terrorists who perpetuated this violence at places of worship,” said U.S. State Department spokesman Jeff Rathke. “The United States stands with the people of Saudi Arabia against this violence and remains committed to working with the Saudi government and our international partners to fight violent extremism in the region,” he added.

The 57-member Organization of Islamic Cooperation also condemned the “terrorist bombing attempt” against the Shia mosque. Its secretary general Iyad Madani, using the Arabic acronym for I.S., said that this “failed attempt has revealed the even uglier face of the terrorist Daesh organization.”

“These ugly crimes will not succeed in breaking apart the components of Saudi” society and will instead bring them closer, said Madani, himself a Saudi national.