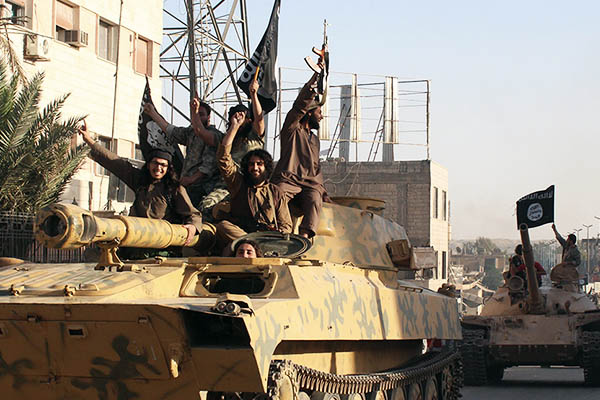 The militant group that controls parts of Syria and Iraq is operating tours of its territory for civilians and jihadists.

Known for kidnapping, public stoning, lashings and executions, the Islamic State (IS) is now expanding into tourism, taking jihadists on honeymoon and civilians to visit other parts of its “caliphate.”

Running twice-weekly tours from Syria’s Raqa to Iraq’s Anbar, IS buses fly the group’s black flag and play jihadist songs throughout the journey. One of the first clients was Chechen jihadist Abu Abdel Rahman al-Shishani, aged 26, who took his new Syrian wife on honeymoon, according to activist Hadi Salameh.

“Just after they got married, he took her to Anbar. These jihadists are very romantic,” Salameh joked. But the two weren’t able to sit together, because “women sit in the back, and men at the front. The bus driver plays jihadist songs all through the ride, and the IS black flag flies over the bus.”

Salameh said the group’s tour buses “start their journey in Tal Abyad [on Syria’s Turkish border] and end in Iraq’s Anbar. You can get off wherever you want, and you don’t need a passport to cross the border.”

The activist, who lives in Raqa and uses a pseudonym to avoid retribution from IS, said via the Internet the company is for profit. “Of course it’s not free. The price varies, depending on how far you go on the bus,” Salameh said.

Syrian rebel Abu Quteiba al-Okaidi, who is from the border province of Deir Ezzor, said most of those who use the buses are foreign jihadists. “Most of them are foreigners. They communicate in English, and wear the Afghan-style clothing preferred by jihadists,” he said by telephone. “There is a translator on the bus, who explains to them where they are going. The men on the bus are not armed, but vehicles carrying armed escorts accompany the bus,” he added.

IS has its roots in Iraq, but spread into Syria in late spring last year. It gradually took over Raqa city in northern Syria, and transformed it into its bastion. In June, IS spearheaded a lightning offensive in Iraq that saw large swathes of the north and west of the country fall from Iraqi government hands.

Abu Ibrahim al-Raqawi, another activist living in Raqa city, said “tour buses run twice a week, on Wednesday and Sunday. It works like any bus company would, except that it treats areas under IS control in Iraq and Syria as one state.” He also said the bus company is “popular” among those with relatives in Iraq.

“Many people living in this area [northern Syria through western Iraq] have tribal ties stretching across the border. So they use these buses to visit their families,” said Abu Ibrahim.

Speaking via the Internet, Abu Ibrahim also said others take the bus “to do business, while some just want to take a break from the shelling in Syria.”

Syria’s war began as a peaceful movement for democratic change, but was transformed into a war after Damascus unleashed a brutal crackdown on dissent. Many months into the fighting, jihadists began streaming into Syria.