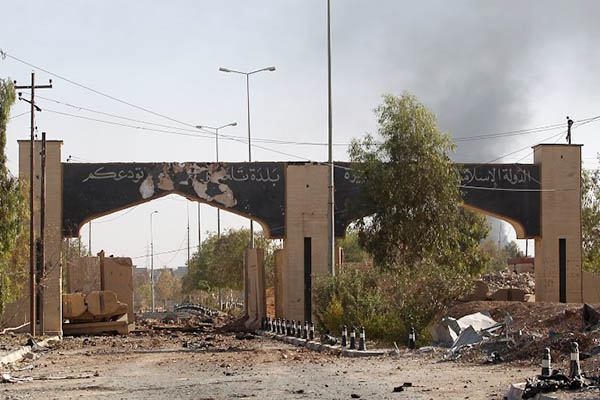 The Islamic State group seized swathes of Iraq and Syria in 2014 as it sought to establish its self-declared “caliphate,” but has faced a series of major defeats in recent months.

Forces backed by a U.S.-led coalition have ousted the jihadists from Iraqi bastions such as Mosul and the extremists also have lost control of more than half of their de facto Syrian capital, Raqa. Here are some of the significant losses for I.S. in a complex and difficult military campaign.

Kobane: The Kurdish town in northern Syria became an early symbol of the fight against I.S. when the jihadists were driven out by U.S.-backed Kurdish forces in January 2015 after a battle of more than four months.

Palmyra: This ancient desert city was seized by I.S. in May 2015 when the jihadists blew up UNESCO-listed Roman-era temples and looted ancient relics. Syrian regime forces backed by Russian warplanes and allied militia ousted them in March 2016 but the extremists won back control by the end of that year before being expelled a second time in March 2017.

Manbij: I.S. seized this strategic town near the border with Turkey in 2014 and used it as a hub for moving jihadists and supplies to and from Europe. It was recaptured in August 2016 after a two-month battle led by a coalition of Arab and Kurdish fighters backed by U.S. airstrikes.

Dabiq: Syrian rebels supported by Turkish warplanes and artillery captured Dabiq in October 2016. Under I.S. control since August 2014, the fight for the city was significant because of a prophecy that Christian and Muslim forces will battle there at the end of time.

Battle for Raqa: A U.S.-backed alliance of Kurdish and Arab fighters launched an operation to capture Raqa in November 2016. They say they now control 60 percent of the city, with an estimated 5,000-10,000 jihadists having fled.

Deir Ezzor: On Sept. 5, 2017, Russian-backed Syrian forces broke a years long I.S. siege on a government enclave in Deir Ezzor city and entered a military base on its western edge after weeks of advances in the eastern oil-rich region.

Tikrit: The hometown of late dictator Saddam Hussein, north of Baghdad, fell to I.S. in June 2014. It was retaken in March 2015 by Iraqi troops, police and Shia-dominated paramilitary forces.

Sinjar: Iraqi Kurdish forces backed by U.S.-led coalition airstrikes recaptured this northern town in November 2015 after jihadists had killed and abducted thousands of members of the Yazidi minority.

Ramadi/Fallujah: The capital of Anbar, Iraq’s largest province, Ramadi was declared fully recaptured in February 2016. Neighboring Fallujah, the first Iraqi city seized by I.S. in January 2014, was reclaimed in June 2016.

Qayyarah: Iraqi forces backed by coalition aircraft retook Qayyarah in August 2016, providing Baghdad with a platform to move on Mosul, the country’s second city 60 kilometers away.