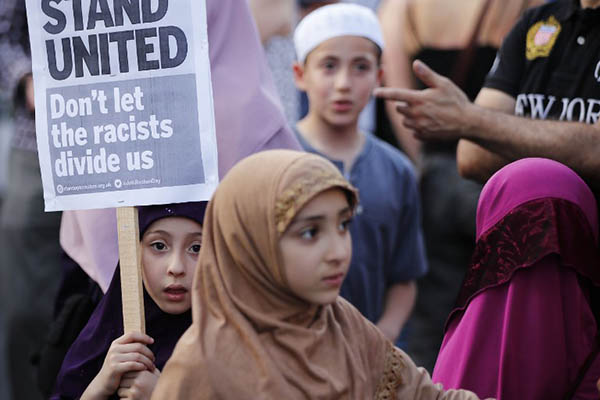 The attack at the Finsbury Park Mosque was the depressingly logical outcome of demonization by tabloid headline writers and rightwing demagogues who portray Muslims as the enemy within, British commentators and Islamic leaders worry.

From opposition politicians to J.K. Rowling and cartoonists in the liberal press, condemnation is building against the swirling currents of hatred that led to a white driver slamming his van into worshippers outside the mosque in north London, shouting “I want to kill all Muslims.” Neighburs of Darren Osborne, the Cardiff man arrested after the attack early Monday, said he was a heavy drinker who had become increasingly deranged after Islamist extremists used a vehicle and knives in a murderous rampage in London this month.

Tommy Robinson, former leader of the far-right English Defence League, made the link explicit in describing Osborne’s attack as “revenge” for the bloodshed in London. Rowling, for her part, pointed to heated rhetoric by Daily Mail columnist Katie Hopkins, as the Harry Potter author tweeted “let’s talk about how the #FinsburyPark terrorist was radicalized.”

After the suicide bombing at a pop concert in Manchester last month, Hopkins had tweeted: “Western men. These are your wives. Your daughters. Your sons. Stand up. Rise up. Demand action. Do not carry on as normal. Cowed.”

According to government statistics, British whites accounted for 91 of 260 arrests for terrorism-related offenses last year, an increase of 28 percent from 2015 and the only ethnic group to show an increase. Anti-Muslim hate crimes are also rising yearly and there have been particular spikes after incidents like the attack in London and the November 2015 massacre at the Bataclan concert hall in Paris.

Until this week, the assassination of lawmaker Jo Cox a year ago was the most visible manifestation of the darker undercurrents at play among far-right fanatics in Britain. But many Muslims say they have long been suffering from daily abuse which has only intensified as tensions surface over flashpoints such as Europe’s refugee crisis and Britain’s Brexit vote to quit the E.U.

Some attacks are physical or verbal, others involve graffiti, the hurling of feces and vomit, or the smearing bacon on car windscreens.

Fiyaz Mughal, founder of Tell Mama, a group that collates figures on anti-Muslim incidents, said the hatred that appeared to have motivated Osborne did not come from nowhere. The biggest factor fomenting anti-Muslim feeling is Islamist violence, he said.

“But sadly, whenever you have a major incident, you have headlines and opinion writers who are allowed to spew out some of the most inflammatory content simply to spawn click-bait and newspaper sales,” Mughal told AFP. “It makes what people feel privately respectable and real,” he said, arguing that an attack like Osborne’s was inevitable in that context.

Raffaello Pantucci, a counter-terrorism expert at the Royal United Services Institute, concurred that the spread of “poisonous rhetoric” from far-right websites to mainstream media and politics legitimized it in public discourse. “It’s unfortunately a vicious circle,” he said, pointing to extremist reactions among some Muslims, “and it’s going to be hard to stop in this febrile atmosphere.”

The Guardian cartoonist Martin Rowson responded to the Finsbury Park attack with a drawing of Osborne’s hired van bearing an advertisement on the side: “Read The Sun and Daily Mail.”

One notorious headline in The Sun in November 2015 reported a “shock poll” finding with the words: “1 in 5 Brit Muslims’ sympathy for jihadis.” Britain’s press watchdog said later that the headline was “significantly misleading” about the opinion poll in question.

But some Muslims also detect official indifference. There was criticism that it took police three hours to publicly characterize the Finsbury Park attack as terrorism, compared with a much quicker response after other incidents, such as the van and stabbing attack near London Bridge this month.

Mughal expressed sympathy for hard-pressed police battling to counter a proliferation of hatred with stretched resources. But he agreed that a vicious circle was now the norm, under which young Muslim men become alienated in response to the perception that they are a malign presence in British society, making them more vulnerable to radicalization.

“When I speak to them, I can’t get through to them. ‘They hate us,’ they say. I tell them this is their country. They say: ‘No it isn’t’,” Mughal said.

But Mohammed Kozbar, chairman of the Finsbury Park Mosque, insisted that extremists were the real minority, pointing to the attendance of people of all faiths and none at a vigil on Monday evening. “Terrorism has no faith, no religion. They are trying to damage our relationship: we will not let them do that,” he told AFP at the mosque.