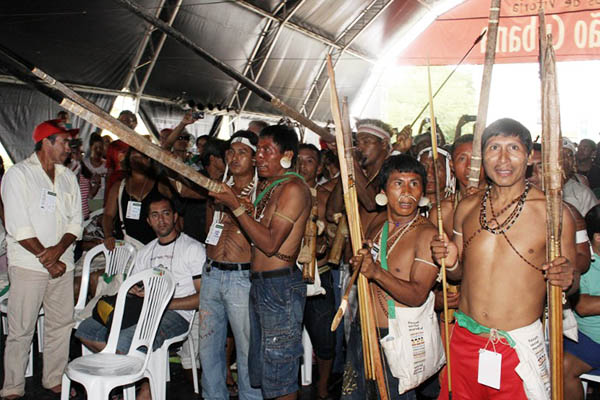 Disease and deforestation are wiping out entire cultures of the world’s most remote civilizations.

Threatened by disease and deforestation, the world’s last isolated tribes in the Amazon are on a collision course with modern society like never before, experts say.

Entire cultures of people are the verge of being wiped out in Peru and Brazil, according to a series of papers published this week in the journal Science. “We are on the threshold of large extinctions of cultures,” Francisco Estremadoyro, director of the Lima-based nonprofit ProPurus, was quoted as saying. “There is no question that this is a historic moment.”

While it is difficult to know precisely what is going on inside remote tribes, researchers say dangerous encounters with modern people are on the rise. And not only because of the risk of violence—common ailments like the flu or whooping cough, transmitted accidentally by loggers, news crews, drug traffickers or well-meaning anthropologists, can be even more deadly.

In one case, a fishbone necklace left by a German researcher decades ago was blamed by villagers along the upper Curanja River for them being poisoned. Soon after it was found, a sore throat and fever illness killed around 200 people. “We were so weak, and some vanished into the forest,” recalled Marcelino Pinedo Cecilio, who grew up planting potatoes and corn and using bamboo arrows, and who remembers running away with his mother the first time they saw people from the outside world in the 1950s.

While other regions of the world—such as the mountains of New Guinea and the Andaman Islands in the Indian Ocean—are home to remote tribes of people, “by far the largest numbers are found across the Amazon,” said the Science report. “And it is in Peru that the situation appears most dire,” it added, describing what experts believe are 8,000 people scattered in small bands across the rainforest.

The Peruvian government has set aside three million hectares of protected land, but it may not be enough. “A surge in sightings and raids in both Peru and Brazil may be a sign that some of the world’s last peoples living outside the global economy are emerging,” said the report.

The collision of cultures began in 1492 with the arrival of Christopher Columbus in the Americas, and has killed an estimated 50 million to 100 million native people, the report said. But even modern technology and knowledge may not be enough to stop wiping out even more people, mainly due to diseases for which tribes-people have no immunity, as well as the lack of enough forest land for food, medicine and materials. The isolated tribes “are some of the world’s most vulnerable people,” said Beatriz Huertas, an anthropologist based in Lima.

In Brazil, where experts were horrified to see 50-90 percent of tribes being killed by disease after encounters with the outside world in the 1970s and 1980s, the government did its best to stop such contacts unless absolutely necessary. But while the plan by Brazil’s National Indian Foundation (FUNAI) became a model for the region, some say the juggernaut of the world’s seventh largest economy is too much to rein in, as developers push ever deeper into the Amazon to dig mines and build dams, pipelines and highways.

From 1987 until 2013, FUNAI made contact with five groups. But in the last 18 months, three tribes have sought out contact, including the Xinane, the Koruba and the Awa Guaja. In one case, four Xinane men entered a village and took machetes, pots and clothing, which can be a source of infection.

So far, FUNAI is aware of 26 isolated indigenous groups in Brazil, and believes as many as 78 more groups may be in hiding or on the run. But money and staff is perilously short at FUNAI, which has two specialized field teams but says it needs 14, at a time when experts believe contacts with isolated tribes will only increase.

“FUNAI is dead,” leading Brazilian ethnographer and former FUNAI employee Sydney Possuelo is quoted as saying. “But nobody told it, and nobody held a funeral.”