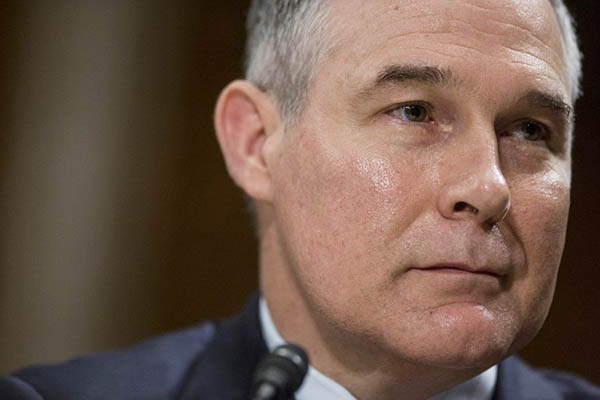 White House accuses Europe of trying to ‘shackle’ U.S. economy and put the country at a disadvantage through Paris accord

The White House hit back on Friday at criticism of Donald Trump’s decision to scrap a major global climate deal, accusing Europe of trying to “shackle” the U.S. economy and refusing to acknowledge climate change is real.

With the United States virtually isolated on the world stage, a string of administration officials went on the offensive on Friday to justify the Republican president’s decision to abandon the 195-nation Paris deal curbing global emissions. Trump’s top climate adviser Scott Pruitt was indignant. “The world applauded when we joined Paris. And you know why? I think they applauded because they knew it would put this country at a disadvantage. The European leaders, why do they want us to stay in? They know it will continue to shackle our economy,” said Pruitt, who serves as Trump’s Environment Protection Agency administrator.

That combative tone came amid a wave of bitter condemnation from around the world and as Trump and his aides refused to say whether he believes climate change is real, in line with the global scientific consensus. Trump ignored the question when asked by journalists during an unrelated event with law enforcement officers, although he did joke that Thursday’s decision had proven “controversial.”

Along with Trump, Pruitt and White House press secretary Sean Spicer were among those who refused to answer repeated questions on the subject. Instead, Pruitt lashed out, saying “we have nothing to be apologetic about as a country,” despite the United States being the world’s second-largest emitter of greenhouse gases after China. “We have taken significant steps to reduce our CO2 footprint,” he said.

That message is likely to play well with Trump’s Republican base, which reveled in defeating what Pruitt called the “environmental left” and “climate exaggerators.”

Expressions of shock and regret poured in from around the world, including from Pacific islands at risk of being swallowed by rising seas, who accused Washington of “abandoning” them. As well as world outcry, Trump’s decision prompted a domestic backlash, with state governors, city mayors and powerful companies already drawing up plans to meet the Paris pact’s greenhouse gas emission targets.

At least two Republican governors announced on Friday they were partnering with Democratic-run states to combat climate change.

U.S. billionaire, philanthropist and U.N. envoy for climate change Michael Bloomberg pledged $15 million to support the Paris agreement’s coordinating agency if necessary—the sum it stands to lose should the United States refuse to pay its share. “Americans will honor and fulfill the Paris agreement by leading from the bottom up,” he said, flying to the French capital to meet President Emmanuel Macron in an expression of solidarity.

In Brussels, European Council President Donald Tusk said the E.U. was “stepping up” cooperation on climate change with Beijing following a summit with Chinese Premier Li Keqiang, while India said it was committed to the Paris accord “irrespective” of the position of other nations.

In a nationalistic “America First” announcement from the White House Rose Garden on Thursday, Trump said he was withdrawing from a U.N.-backed deal that imposes “draconian financial and economic burdens” on the United States while going too easy on economic rivals China, India and Europe. “We don’t want other leaders and other countries laughing at us anymore. And they won’t be.”

Trump offered no details about how, or when, a formal withdrawal would happen. At one point he suggested a renegotiation could take place, an idea that was unceremoniously slapped down by partners. “There is nothing to renegotiate here,” E.U. climate commissioner Miguel Arias Canete told reporters in Brussels.

Nicaragua and war-torn Syria are the only countries not party to the Paris accord, the former seeing it as not ambitious enough.

White House officials acknowledged that under the deal, a formal withdrawal might not take place until after the 2020 election, and leaders will certainly push Trump to reconsider his decision in the meantime.

Trump’s announcement comes less than 18 months after the climate pact was adopted, the fruit of a hard-fought agreement between Beijing and Washington under Barack Obama’s leadership. The Paris Agreement commits signatories to efforts to reduce greenhouse gas emissions that cause global warming, which is blamed for melting ice caps and glaciers, rising sea levels and an increase in extreme weather events. They vowed to take steps to keep the worldwide rise in temperatures “well below” two degrees Celsius from pre-industrial times and to “pursue efforts” to hold the increase under 1.5 degrees Celsius.

Opponents of Trump’s withdrawal—said to include his daughter Ivanka—had warned Washington’s global leadership role was at stake, along with the environment. Many American business leaders have voiced disappointment at Trump’s decision to leave, latest among them Dow Chemical chairman and CEO Andrew Liveris, who heads the president’s manufacturing council. “Leaders don’t leave tables, leaders stay,” he told CNBC.