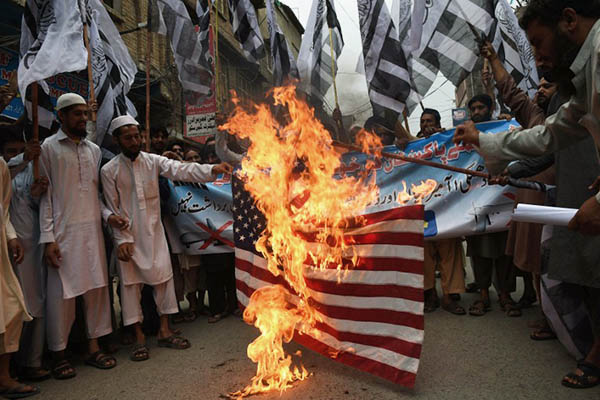 Two events in Islamabad reported on May 31 signal the kind of dangerous isolationism some in Pakistan have succumbed to. The first was the meeting of the Defense of Pakistan Council led by Jamat-ud-Dawah chief Hafiz Saeed, and second, a workshop by Islamabad’s Strategic Vision Institute on national security, deterrence and regional stability in South Asia. Both warned of dire consequences from events in the regional neighborhood and criticized Pakistan’s passive response to them. Consider how both, while complaining of isolation, actually recommended isolationist measures certain to bring more trouble to Pakistan.

In the Defense of Pakistan Council, Maulana Sami-ul-Haq, known as the mentor-teacher of the Afghan Taliban, warned that the new Afghan Taliban chief Mullah Haibatullah Akhundzada will kill more people than were killed under the late Mullah Akhtar Mansour. The Council asked America to “leave the region” because “talking peace to America is futile,” and accused India of fomenting trouble in Pakistan. The Council also complained of inaction by Islamabad against Bangladesh where Jamaat-e-Islami leaders sympathetic to Pakistan were being hanged. This gathering of powerful religious organizations will now stage its protest in Islamabad on June 5.

Two retired generals, both former defense secretaries, spoke at the Strategic Vision Institute workshop and said that the three-state trade hub at Chabahar in Iran was a threat to Pakistan’s security while the China-Pakistan Economic Corridor (CPEC) was no threat to India. “The alliance between India, Afghanistan and Iran is a security threat to Pakistan and Pakistan is going into isolation,” said one while the other described it as “falling into an abyss of isolation.” They blamed Pakistan’s Foreign Office—“without a fulltime foreign minister”—of flunking its duties. It was recommended that “the defense and strategic relationship with China be formalized instead of an unwritten understanding,” little knowing that China has abstained from written “pacts” as policy.

Pakistan could have forestalled the Iran-Afghanistan-India “threat” by allowing a trade route to India and Afghanistan through its territory. It can dilute the “danger” even now by joining Chabahar with Gwadar and opening CPEC to India’s trade. The two events in Islamabad can be defined as isolationism nurtured by warlike elements that think in terms of conflict and can’t look at security through the economic lens. It may well be that Pakistan is not suffering from isolation as much as from isolationism.