Home Latest News ISPR Should Not Appear to Stand Behind Any Political Party: Maryam Nawaz

ISPR Should Not Appear to Stand Behind Any Political Party: Maryam Nawaz 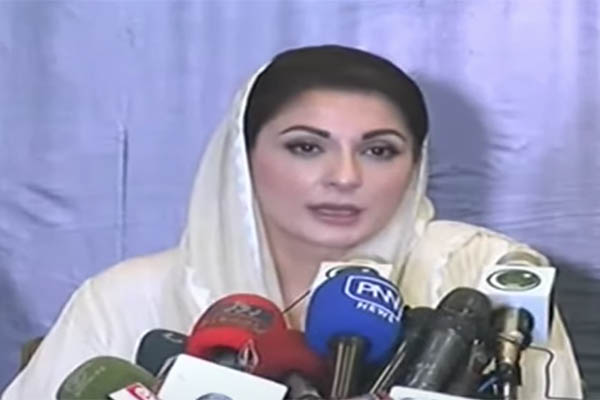 Referring to last week’s press conference by the spokesman of Pakistan’s armed forces, Pakistan Muslim League (Nawaz) Vice President Maryam Nawaz on Sunday said that it “does not suit the armed forces and other institutions to appear they are standing behind a political party.”

Addressing the PMLN’s Sher Jawan Movement opening ceremony, she said the director general of the Inter-Services Public Relations (ISPR) was a “professional soldier” and as a “spokesperson of an institution,” he should react carefully. “Imran Khan and the government benefit if they drag institutions in politics; it suits them. But it does not suit the armed forces and other institutions to appear they are standing behind a political party,” she said. “This discrimination should not be there; they [institutions] are as much ours as theirs [PTI]. Such precedents should not be set as it increases the divide between institutions and public,” she added.

Last week, ISPR DG Maj. Gen. Babar Iftikhar had told a press conference that any attempt to link the release of Indian pilot Wing Commander Abhinandan Varthaman with anything other than Pakistan’s mature response as a responsible state was “misleading.” While he did not name anyone directly, the rejoinder was seen to be in response to PMLN leader Ayaz Sadiq claiming, in the National Assembly, that the PTI government had released Abhinandan out of fear of a retaliatory attack from India.

Indian media had twisted Sadiq’s statement to claim he had been referring to fear in Pakistan’s armed forces, which he clarified in a video statement as “totally contrary” to what he said in Parliament. In an appearance on Indian media, Science and Technology Minister Fawad Chaudhry also said that Sadiq had been referring to the foreign minister, “as he is our political opponent. He did not even name the Army chief.”

Chaudhry had himself come under fire by claiming, in Parliament, that Prime Minister Imran Khan had staged Pulwama, the Feb. 14, 2019 militant attack on a convoy of security personnel in India-held Kashmir that resulted in the deaths of 40 people. He later sought to distance himself by claiming he was referring to the events that happened after Pulwama.

In her address, Maryam questioned why the Army spokesperson had not felt the need to clarify the minister’s statement as he had that of Sadiq. “Even the Indian prime minister is charge-sheeting us” for Chaudhry’s statement, she said, referring to Indian P.M. Narendra Modi claiming his statement had confirmed that Pakistan, as a state, was behind that terrorist act.

Urging PMLN supporters to stand with Nawaz Sharif’s struggle for respecting the sanctity of the vote, Maryam stressed that no one should “malign the uniform,” rather they should “expose the characters who defame” the armed forces. Criticizing China-Pakistan Economic Corridor Authority Chairman Lt. Gen. (retd.) Asim Bajwa, she reiterated that the “nation wants to know how you, a salaried man, started businesses across the world.”

Maryam also criticized the alleged abduction and detention of the Sindh inspector general of police to pressure him into issuing arrest orders for her husband, Mohammad Safdar.