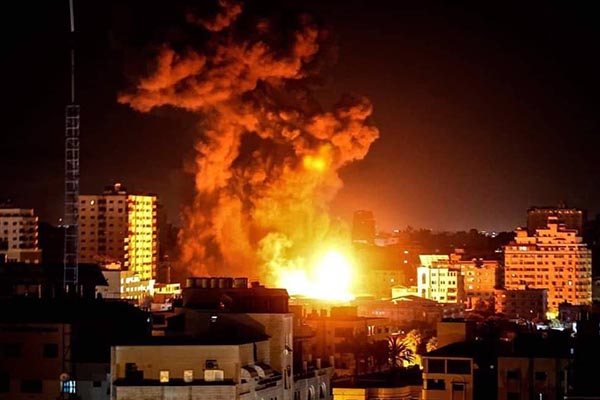 At least 42 Palestinians were killed on Sunday, according to paramedics, as Israel continued airstrikes launched last week that have flattened several buildings—including the offices of various media organizations.

In a televised address, Israeli Prime Minister Benjamin Netanyahu warned that the attacks would continue for some time—despite international efforts to broker a ceasefire—and at “full force” so a “heavy price” could be levied from Hamas rulers.

Sunday’s assault, said the Gaza Health Ministry, resulted in 16 women and 10 children being among the killed. It added that over 50 people had been wounded. The violence has been described as the worst in the region since the devastating 2014 war.

The past week’s airstrikes have levelled several of Gaza City’s high-rise buildings—including a building housing The Associated Press office and those of other media outlets—with Israel alleging they housed Hamas military infrastructure. Israel routinely alleges the presence of Hamas in specific locations as a pretense for launching airstrikes, including residential buildings, but rarely provides any evidence to back up its claims.

The latest violence began in east Jerusalem last month after Israeli police targeted Muslim activities at the Al-Aqsa Mosque during Ramzan and threatened the eviction of dozens of Palestinian families, provoking Palestinian protests. As the protests became violent—with videos shared on social media showing Israelis harassing Palestinians and setting their properties on fire—Hamas fired rockets toward Jerusalem late on Monday in retaliation. This triggered the ongoing Israeli assault, which has prompted outrage globally. Over the weekend, several cities across the world witnessed large protests calling for an end to the Israeli violence and peace and freedom for Palestine.

Overall, at least 188 Palestinians have been killed in Gaza since the latest airstrikes were launched, including 55 children and 33 women. Additionally, 1,230 people have been wounded. The Hamas shelling has resulted in eight people in Israel being killed, including a child and a soldier.

While Hamas and the Islamic Jihad militant group have claimed that 20 of their fighters have been killed since the fighting broke out last Monday, Israel claims this is an undercount, and has released the names and photos of two-dozen alleged operatives it says were “eliminated.”

The Organization of Islamic Cooperation, following a meeting on Sunday, issued a statement demanding that Israel halt attacks targeting Palestinian civilians. The 57-nation bloc called for an immediate halt to Israel’s “barbaric attacks” on Gaza and blamed “systematic crimes” against the Palestinians for the ongoing hostilities.

The meeting, at one point, turned contentious as some nations—notably Iran and Turkey—criticized countries that had initiated recent “normalization” of ties with Israel. “The massacre of Palestinian children today follows the purported normalization,” Iranian Foreign Minister Mohammad Javad Zarif said. “This criminal and genocidal regime has once again proven that friendly gestures only aggravate its atrocities,” he added.

Bahrain, Morocco, Sudan and the U.A.E. last year enacted normalization deals to recognize Israel, while Egypt and Jordan had earlier inked the same. Ankara also maintains diplomatic ties with Israel. Despite this, Turkish Foreign Minister Mevlut Cavusoglu accused countries that had voiced support for Israel of having lost their moral compass. “If there are half-hearted statements within our own family, how could we criticize others? Who will take our words seriously?” he said.