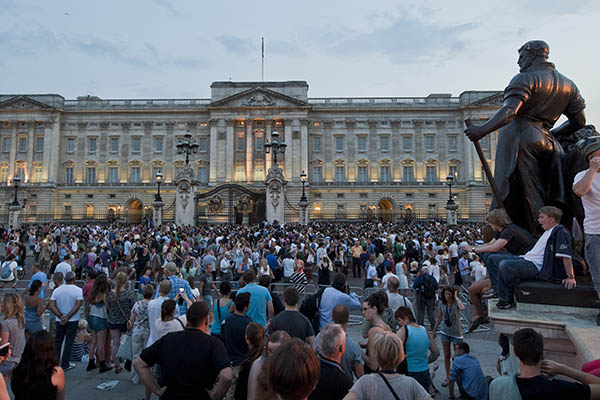 A joyful crowd popped corks, cheered and strained to glimpse the official notice outside Buckingham Palace, after the birth on Monday of a baby boy to Prince William and wife Kate.

The center of attention at the palace was a golden easel upon which royal officials placed the formal birth announcement.

“We just wanted to mark the birth in our own way,” said Itsuki Kuroda, a Japanese woman living in London, who was being photographed by husband Kenta in front of the palace with their two-year-old daughter Akari, who was dressed in the red, white and blue of the Union Jack. “This boy’s going to be king one day—it’s historic!” Kenta said.

Camera flashes lit up the evening scene outside the queen’s official residence as dozens of people tried to immortalize the moment when it was announced that the third in line to the British throne had been born.

The crowds pressed against the iron gates of Buckingham Palace and spilled onto the steps of the huge statues of Queen Victoria and other monarchs in the plaza in front of the vast building.

Cheers went up outside the palace the minute the announcement came, as they did at the central London hospital where the baby was born and where more well-wishers gathered along with hundreds of international media.

“We are delighted to be here, it’s a very good feeling and a great atmosphere,” said Sylvie Beaver, a 28-year-old from London who was outside the palace with her boyfriend. “We bet it was a boy but I would have probably prefer a girl because we already have prince Harry, William and Charles, too many kings!”

A French couple said they were amazed not to see more of their countrymen celebrating with them. “We saw the news on the Internet and said ‘why not go down, it’s not late and it’s a big thing,” said Pierre Marriage, 21. “I’m happy for the British—they are living history,” added Marriage, who said he thought the royal baby would be called George.

Fellow Frenchman Philippe added: “It is a celebration, it is the whole world, and we drink and chat with Englishmen and Pakistanis. I think it’s great—long live the royalty, even if I am a republican.”

Patriotic songs rang out as the night wore on but the atmosphere was still welcoming for foreign visitors.

“We think it’s so exciting that there is a new third in line to the throne—we came here on Thursday and were very hopeful we would be here for the exciting news, we don’t have royalty so to us this is very, very exciting,” said Janice, a visitor from Ohio in the United States.

Rob, a Londoner, said: “I’m hugely excited—I’ve been waiting all day for the news and I can’t wait to find out the name of the boy. I’m going for Albert.”

The London Eye, a huge wheel with viewing pods that towers above the capital, was lit up in red, white and blue while the BT Tower carried the message “It’s a boy” on huge digital screens.

The joyous scenes of partying came after a sense of relief earlier in the day for the international journalists who had camped out for three weeks outside St. Mary’s Hospital in Paddington, central London, waiting for Kate to give birth.

Shanshan Yang from China’s CCTV channel said as the media waited for an announcement after Kate was admitted to hospital: “It was a long wait. We didn’t show up every day, but now of course we’ll stay here until the baby comes.”

Hardcore royalists who camped outside the hospital for several days were also over the moon. “I’m so excited, like I’m in a washing machine,” said John Loughrey, who has slept on a bench resplendent in the red, white and blue of the British flag.