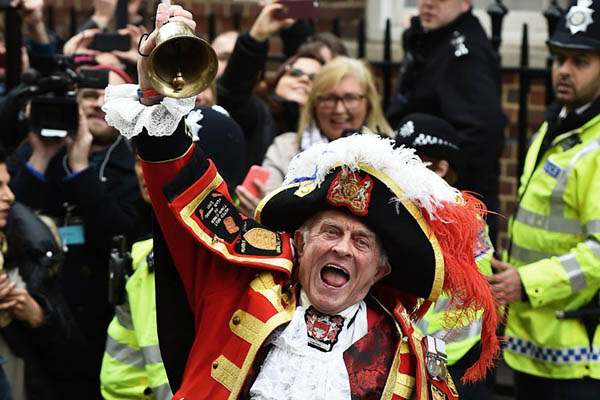 Kate Middleton and Prince William’s new arrival is a princess who will be fourth in line to the British throne.

Prince William’s wife Kate gave birth to a girl on Saturday, sparking celebrations for the royal couple’s new arrival, a princess who becomes the fourth in line to the British throne.

“Her Royal Highness The Duchess of Cambridge was safely delivered of a daughter at 8:34 a.m.,” the royal residence of Kensington Palace said in a statement. Mother and baby “are both doing well,” it said.

Prince William was present for the birth and all senior members of the royal family have been told the news, which was first announced in a tweet and then by the traditional colorfully dressed town crier on the steps of the hospital.

The new Princess of Cambridge, who weighed in at 8 pounds 3 ounces, comes after big brother George in the line of succession, below Queen Elizabeth II’s eldest son Prince Charles and his eldest son William.

The names favored by bookmakers are Alice and Charlotte.

Media teams from around the world rushed to the private maternity wing of St. Mary’s hospital in the early morning, joining a group of royal super-fans who have remained camped outside for more than a week. There were cheers in the crowd after the birth, with supporters singing: “It’s a girl! It’s a girl!”

“I’m so pleased,” Margaret Tyler, 71, who wore a jacket in the colors of the British Union Jack flag and a badge in honor of William’s late mother Diana. “William wanted a girl and Diana wanted a girl. I think it’s just nice for George to have a little sister,” she said.

Royal fan Kathy Martin donned a pink party hat and started dancing on the spot. “It’s the happiest news, just what we’ve been waiting for,” she said.

Kensington Palace said Kate was admitted to the hospital accompanied by her husband at around 6:00 a.m. in the early stages of labor.

British Prime Minister David Cameron sent his best wishes in a tweet. “The whole country will wish her well,” he wrote shortly after she was admitted.

Within minutes of the news that Kate had gone into labor, the news was trending on Twitter with the hashtag #royalbaby and more and more curious onlookers could be seen arriving at the private clinic in the city center.

“I heard it on the radio and I got up and came straight here!” Michelle Lassiter, a 55-year-old charity worker who traveled from her home in Guildford near London with a fold-up chair, told AFP.

Guy Thorpe-Beeston, surgeon-gynecologist to the royal household and a specialist in high-risk pregnancies, led the delivery team.

Kensington Palace had announced Kate’s pregnancy in September and she struggled with severe morning sickness as she did in her first pregnancy. William has told supporters the second child will be a “game-changer” after the first “life-changer.”

William and Kate are planning to spend the first few days after the birth at Kensington Palace. They will then travel to Anmer Hall, a secluded 10-bedroom country mansion on Queen Elizabeth’s privately owned Sandringham estate in Norfolk, eastern England, where they have set up home.

Cannons will be fired across London to celebrate the birth—62 shots from the Tower of London and 41 from Green Park—and the British flag will be flown from government buildings.

The baby’s name may not be revealed for several days. William’s name was not announced for a week, while the world had to wait one month after Charles was born. George was named two days after his birth.

The princess will be christened as a member of the Church of England, wearing a replica of the intricate lace and satin gown made for Queen Victoria’s eldest daughter in 1841.

Experts say the royal birth could inject tens of millions of pounds into the British economy, with a baby princess particularly lucrative because she could become a fashion trendsetter.