Home Lightbox It’s in Our DNA

It’s in Our DNA 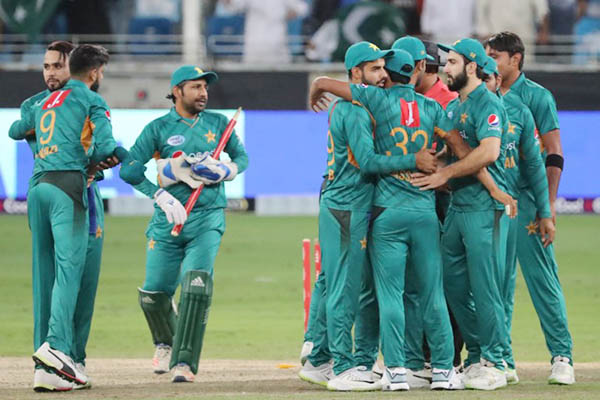 Brash young players, peak fitness and a winning mentality “in their DNA,” Pakistan are the current kings of international Twenty20 cricket.

The last two Sundays have seen Pakistan race to series whitewashes in the game’s shortest format against Australia and New Zealand. They also have registered 11 consecutive series wins—a world record.

“It’s partly our DNA,” said Raja. “But our successes have a lot to do with skills and fitness. Pakistan is a damn good team in this format, bowling out the opposition at will.”

With their powerful and penetrative bowling unit, Pakistan have dismissed rival teams the most times—31 in all—while, in the last two years, they have defended a total of under 150 for 40 times out of 44, with three failures and one tie.

Sunday’s win against New Zealand in Dubai was their ninth match victory in a row—their biggest winning streak. “Pakistan take this format very seriously and play with regular players most of the time,” said Raja.

The greatest of all the surprises is Pakistan’s fielding—not a strong point in the past. Their fielders have helped with 25 runs outs in the last 28 matches.

Pakistan’s wicket-taking ability is second to none, having bowled out opposing teams (all 10 wickets) on 31 occasions—the most by any team.

Following their first round exit from the 2016 World Twenty20, Pakistan have a new captain in Sarfraz Ahmed while the coaching reins were handed to South Africa’s Mickey Arthur, a former Australia coach.

Chief selector Inzamam-ul-Haq, one of Pakistan’s greatest batsmen, had no reservations over selecting youngsters. It completely changed the scenario as since September 2016, Pakistan have won 29 of 33 Twenty20 internationals with only four defeats.

The current year has been phenomenal for Sarfraz and his young side, winning 17 of their 19 matches with two losses. So what has changed?

Analysts say it is linked to the youthful nature of the country. According to the Election Commission of Pakistan figures, 42.4 million out of the nearly 97 million registered voters in this year’s poll which saw former cricket captain Imran Khan become prime minister were between the ages of 18 and 35. “The prime reason for the success in Twenty20 is the power of youth,” ex-captain and coach Waqar Younis told AFP. “Young players are hungry for success, they do the hard work and want to achieve and that has changed the whole picture.”

Pakistan’s latest pace sensation, Shaheen Shah Afridi, is only 18. He became the youngest bowler to take three wickets in a Twenty20 international against New Zealand in Dubai on Friday.

World number one Twenty20 batsman Babar Azam became the quickest to 1,000 runs in the shortest format in just 26 innings, beating India’s maestro Virat Kohli’s feat by an innings. Azam is only 24 and so is Hasan Ali and Faheem Ashraf while leg-spinnner Shadab Khan is only 20.

“The key difference is that we are a very young team and our fielding stands out and that has made us a good team,” said Sarfraz. “We have introduced youth and the results are obvious. We want to rise and rise and maintain that position.”