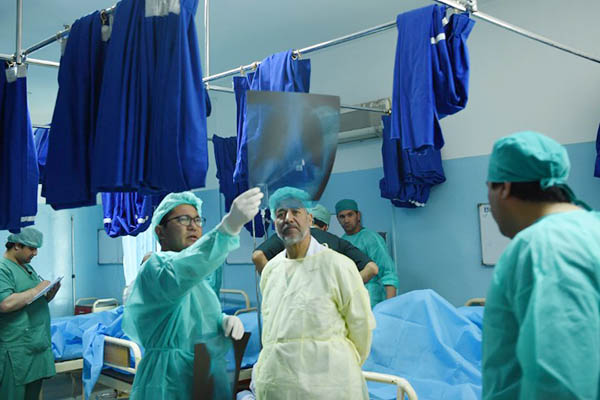 Afghan surgeon Hedayatullah Hedayat has treated thousands of civilians wounded in conflict over the past 15 years—victims of attacks from shootings to bomb blasts—but he never gets used to the horrors of war.

“It’s not normal,” said Hedayat, 42, who works at a trauma hospital in Kabul run by Italian Charity Emergency, where the wards are filled with casualties, many wearing splints, casts and bandages. “Each case of trauma for me is new, a new hurt, a new wound on the soul. Psychologically it’s a trauma,” he added.

In 2018 a record 10,993 civilians were wounded or killed in Afghanistan, according to U.N. figures released on Sunday. Many of them were rushed to Emergency’s basic but clean 120-bed facility in the heart of the Afghan capital, which focuses on providing urgent treatment to victims of war.

Inside the hospital, two boys lie on adjacent beds under light-green blankets, one with a broken arm, the other on a drip, as winter light streams into the room from the snow-covered grounds outside.

Meanwhile the highly trained Afghan and foreign medical staff prepare to change the dressing on a leg wound, and a meal of rice, soup, and an apple is served to the inpatients.

Of last year’s civilian casualties, 3,804 died and 7,189 were wounded—the highest U.N. tally since it began keeping records in 2009 and including 927 children, a record for a single year. It underscores how regular Afghans continue to pay a disproportionate price in the deteriorating security situation, as the U.S. begins fresh talks with the Taliban in Qatar this week seeking an end to the conflict.

The doctors at Emergency are in a constant state of readiness for the next suicide attack or roadside bombing. Since 2014, when NATO combat troops pulled out of the country, “every year the number of patients and the severity of the casualties are increasing day by day,” Hedayat said recently.

A record 4,076 people were admitted to the Kabul hospital in 2018—530 more than the previous year, said Dejan Panic, program coordinator for Emergency in Afghanistan, which also operates two other hospitals as well as dozens of health clinics around the country. “That was the busiest so far,” Panic said.

Ordinary Afghans have long borne the brunt of fighting in Afghanistan, which by some estimates is now the world’s deadliest conflict zone. Most were simply in the wrong place at the wrong time.

Thirteen-year-old Samiul Haq was planting onions with his father and brothers a few hours drive from Kabul when he was shot three times in a skirmish between Taliban militants and Afghan forces. One of the bullets sliced off his left index and middle fingers, leaving the schoolboy with a permanent reminder of the 17-year war.

“I got hit three times—once in the fingers, once in the elbow and once in the leg,” Samiul Haq said as he prepared to leave Emergency’s facility.

Abdul Salaam Stanekzai, 67, was walking home from a Quran recitation ceremony in the eastern province of Logar when a magnetic bomb attached to a passing vehicle exploded, spraying shrapnel into his arm and leg. One person was killed and three others were wounded in the blast, Stanekzai said, as he sat in his hospital-issued pajamas in a men-only ward overlooking the garden.

Some do not even have to leave their own home to become a statistic of the long-running conflict.

Computer science student Amir Mohammad Amiri was walking around his family’s house late at night in the southeastern province of Ghazni when he was shot during a joint U.S.-Afghan forces operation. “I was going from one room to another when the bullet hit me,” said Amiri, 23, a thick white bandage covering the right side of his chest. “They were searching for Taliban.”

The never-ending violence makes Hedayat worry for the future of his own four children. “I hope they will have a normal life,” he said. “They shouldn’t have a life like mine.”