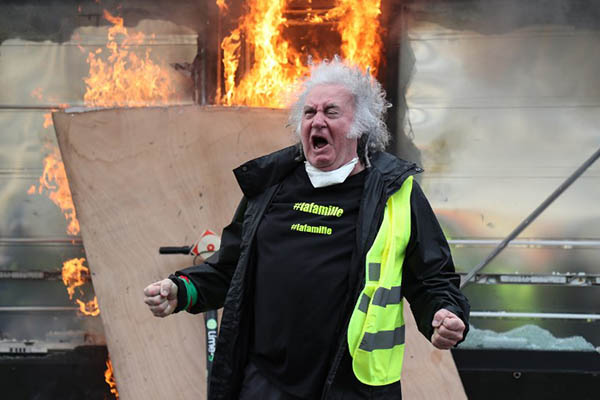 The Champs-Elysees avenue in Paris was a sea of black and yellow on Saturday as black-clad anarchists used a “yellow vest” rally to run amok, looting shops and torching businesses in scenes reminiscent of the riots that shook the city late last year.

“There are people and there is action. It reminds me of December!” a young protester shouted triumphantly as flames billowed from a bank and thick black smoke rose from burning barricades erected along the famed avenue.

The demonstrator was referring to Dec. 1, when protesters went on the rampage in Paris, smearing the Arc de Triomphe war memorial in graffiti in a frenzy of vandalism, looting and arson. The violence prompted President Emmanuel Macron’s government to rescind planned fuel tax hikes and announce billions in measures to assist the working poor.

But on Saturday, the demonstrators returned in their thousands to once again transform the Champs Elysees—a symbol of French power and luxury—into a battlefield. Using banners and construction barriers as shields the “black bloc” protesters ripped up paving stones which they used to smash shop windows and attack the police. The wooden boards nailed over the windows of stores such as Boss and Lacoste were ripped off and thrown onto burning heaps as looters emerged, arms laden with stolen clothes, some of which were used to fuel the flames.

“It’s unfortunate but this is the only way we can make ourselves heard,” a “yellow vest” who traveled from the southeastern Bourgogne region for a protest billed as an “ultimatum” to Macron, said as he looked on.

The police, which had erected a ring of steel around the Arc de Triomphe, battled for over seven hours to disperse the protesters, using copious amounts of tear gas, stun grenades and water cannon. But for most of the day the protesters, who waved French as well as regional flags and chanted “Macron resign,” held the famous avenue which was shrouded in smoke and teargas.

“It’s the apocalypse!” one demonstrator shouted with glee.

As the day went on, the wave of destruction spread. A bank situated on the ground floor of an apartment building was set alight. A woman who was evacuated with her four children, including a nine-month-old baby, fought back tears as she talked of their escape down the stairs from their third-floor apartment. “We first smelled the tear gas fumes and then saw the fire from the window,” she said. “They could have killed someone,” her partner Reda added.

A Longchamp luxury handbag store was also set alight, along with a restaurant specializing in mussels and the terrace of a large café and several of Paris’s iconic green-domed news kiosks.

Interior Minister Christophe Castaner blamed the violence on “over 1,500 ultra-violent people who came to smash things up, do battle and attack.”

As the evening drew in and the rioters were pushed off the Champs-Elysees into smaller adjacent streets, the walls bore their imprint. One slogan mocked the two-month-long “grand national debate” launched by Macron in mid-January to give voters a forum to air their grievances. “End of the debate, start of the big clearout,” it read.

The smashed window of a store was scrawled with the words “Open day.” By the early evening 151 people had been arrested, of whom 46 were placed in custody.