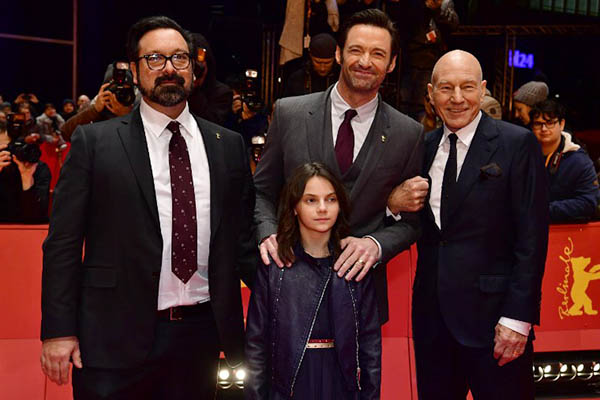 Hugh Jackman’s rip-roaring final turn in the Wolverine franchise premiered at the Berlin film festival on Friday, as he admitted he shed a few tears saying goodbye to the juggernaut role.

Logan sees the blade-fingered superhero reunited with his ailing father figure Professor X (British actor Patrick Stewart) and introduced to Laura, his mutant daughter he was unaware had been created in a Mexican laboratory. Though still small, Laura (newcomer Dafne Keen) inherited her father’s steely claws and awesome strength. She joins him in battle against the agents of an American company that wants her back after engineering her along with a band of superhuman child soldiers.

Jackman, who first appeared in the role of Wolverine from the Marvel comics X-Men series in 2000, said the family story packed a heavy emotional punch for him and, he hoped, the audience. “When I saw the movie I was very nervous, knowing what was at stake for me and it exceeded my expectations. I looked at that character—there were some moments I cried, in weird places like carrying the child [Laura] back up the stairs,” he said. “I can’t say I’ll miss him because it’s difficult to describe, it’s not going anywhere for me. It will always live here. The fans will remind me every single day of my life whether we got it right or wrong.”

The film’s opening chapter takes place along a heavily militarized U.S. border with Mexico, in the near future. Logan—or Wolverine—and Professor X are living in hiding when Lisa surfaces, having escaped her creator-captors with the help of a nurse from the clinic.

The woman pleads with Logan to shepherd Lisa to “Eden,” a safe haven in North Dakota, near the Canadian border.

The three generations of the family end up on a fateful odyssey through an America populated by ruthless corporations and the decent citizens who try to stand up to them.

Stewart said the resonance of the picture’s themes had grown stronger during production. “We did not set out to make a political movie and yet there are references and echoes in this movie that could not have been anticipated but exist today,” he said. “That is serendipity.”

Jackman also saw the story as prescient. “We were talking when we got down to set—a year before any of those debates happened—the whole wall and the scenes at the border were in our script and it was kind of amazing,” he said.

Writer-director James Mangold said that the ultra-violent movie, rated adults only, was intended to delve into mature topics even though many of its cast are kids. “We are selling this movie to grown-ups, and that gave us the freedom to make a movie for grown-ups,” he said. “The ideas, the scene length doesn’t have to be tailored to the attention span of a nine-year old. We don’t need to add sidekicks so we can sell an action figure. The themes and ideas of taking care of an ageing parent or the nature of death and life and the meaning of it can be somehow explored with credibility and sophistication.”

Ahead of the red-carpet world premiere in the German capital, Stewart said he wanted to “apologize” to Europeans for Britain’s vote to leave the E.U., a development he said filled him with “embarrassment and shame.”

“I want you to be absolutely clear that more than half the nation did not vote for Brexit,” said Stewart, who campaigned for the ‘Remain’ side. “The vote only went the way it did because the nation was lied to and people voted out of the best possible interests but it is and was a calamitous mistake.”

Logan screened out of competition as the final feature at the 11-day Berlinale, which will award its Golden and Silver Bear prizes at a gala ceremony on Saturday.