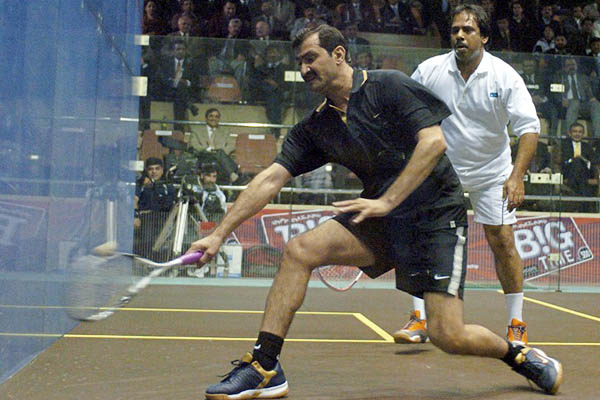 Once a global powerhouse, Pakistan has languished in recent years, with no current players able to qualify for British Open.

Jahangir Khan, often described as the greatest squash player of all time, has outlined a new plan that he hopes will spark a revival of the sport in Pakistan. It involves transforming a situation in which Pakistan, once by far squash’s most successful nation, has had no British Open winner since 1997, nor a world top 10 player since 1997. Currently there are no Pakistani players able to qualify for the British Open main draw.

“We have to do much more to turn that around,” said Jahangir, speaking on Sunday’s finals day at the British Open—a tournament he won a record 10 times—in Hull, northern England. “It involves funding and good organization, and now we have a plan which has a chance of starting a recovery.”

Part of Jahangir’s bid to arrest the decline of Pakistani squash involves the creation of a junior academy which will use the facilities of his own squash center, the Roshan Khan/Jahangir Khan complex in Karachi, recruiting, coaching and developing talent, and providing resources for travel to overseas tournaments. The academy will provide accommodation, food, equipment, and funds for boys to participate in national and international events, including an upcoming tournament in Penang, Malaysia.

In some cases, squash will also be used as a way of creating a transformation of the lives of less fortunate youngsters. All this has been made possible by the sponsorship of Kazim Anwar, a businessman and philanthropist who runs a trust.

There is plenty of tradition on which to build and inspire budding Pakistani squash champions. During the 20th century Pakistan produced seven British Open champions—in years when it was usually regarded as the world’s top tournament—and these players held the title for their country for 30 of the 78 years in which the men’s event has been held.

“I believe we still have the talent to make great squash players,” asserted Jahangir, 51. “It’s a question of getting the resources and the organization together to make use of it.” The project intended to do this is called CHIPS, signifying the Champion Hunt Initiative Program, which will provide training for boys in five age group categories as well as full-time coaches.

Jahangir himself will help with the coaching, and also working on the project are Saeed Khan, the director of the program, and Rashid Ahmed, the coordinator. The task, however, is formidable.

First Pakistan’s squash hopes were hit by a growth of funding in other countries, enabling them to take advantage of vastly superior and rapidly developing sports science. Then the country’s always narrow playing base made it far harder in the modern era to develop talent in an increasingly competitive world and eventually the whole country was hit by political instability which has prevented Pakistan from holding a major event for nearly a decade. No PSA World Tour tournaments were held at all in Pakistan in 2009.

Jahangir was at pains to emphasize that the new project was not intended to compete with the work of the Pakistan Squash Federation, the governing body of the sport in his country. “We only want to help and we know what we have to do,” he said. “It’s a question of proper organization. Basically Egypt’s styles and Pakistan’s are the same,” he added, referring to the Middle East nation which in 15 years has transformed itself into by far the most successful in squash, with modern-day leading players such as Amr Shabana and Ramy Ashour.

“I was there [in Egypt] two weeks ago,” added Jahangir. “They have the organization. There everyone knows about squash, and about their great players. We can provide help to our young talent to do well again. But squash is a full-time job now and you need a very professional attitude. That’s what we really need to develop.”