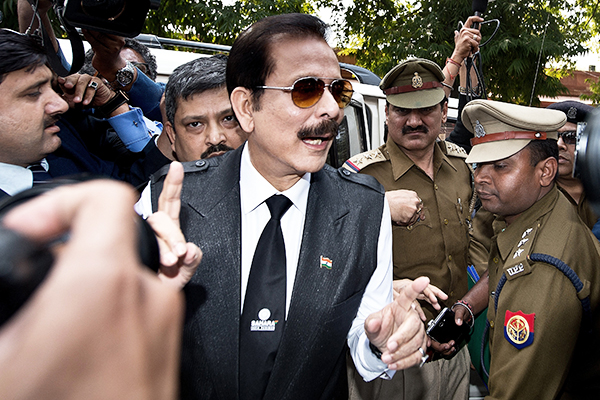 Subrata Roy is looking to sell the Plaza Hotel and Grosvenor House.

“There are people interested in the properties, we can’t say more,” a Sahara official said on condition of anonymity. “We expect [the conference room] to start getting the equipment in by Tuesday,” the official added.

Roy acquired a 75-percent stake in the Plaza in 2012 just as his legal woes were mounting. The three hotels are valued at a total of around $1.6 billion, according to a valuation cited by the Supreme Court.

The Supreme Court jailed Roy, known for his rags-to-riches story and mansion modeled on the U.S. White House, in March after he missed a court appearance in a long-running row with security regulators. The Supreme Court bench, headed by Justice T. S. Thakur, allowed Roy and two jailed company directors and three secretaries, video-conferencing and computers to facilitate sale negotiations. The three men will sleep at the conference facilities and be allowed to work from 6 a.m. to 8 p.m. to allow for international time differences.

Sahara raised $3.2 billion from millions of small savers through an illegal bond scheme. Regulators ordered the group to pay the money back—even though the Supreme Court said there were “serious doubts about the existence” of the investors, fueling long-running allegations of money-laundering. Sahara has always denied the allegations and insisted the company was only helping poor, mainly rural investors who are hard to locate.