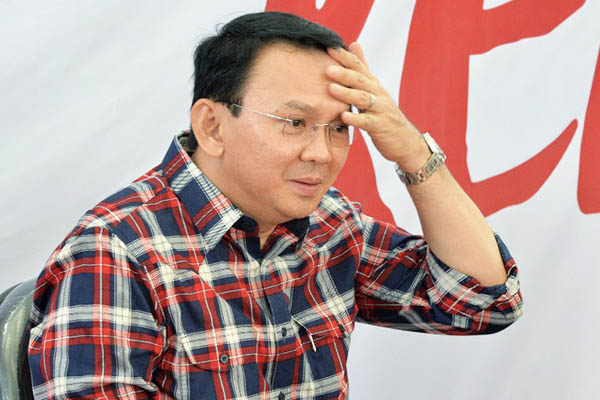 Following mass protests, police say Basuki Tjahaja Purnama should go on trial and have ordered him not to leave Indonesia.

Jakarta’s Christian governor was formally named a suspect in a blasphemy investigation on Wednesday, after allegations that he insulted Islam sparked a violent mass protest by Muslim hardliners in the Indonesian capital.

Police said the allegations against Basuki Tjahaja Purnama, who is also the first member of Indonesia’s ethnic Chinese minority to lead Jakarta, should go to trial and ordered him not to leave the country. The case is being viewed as a test of religious tolerance in the world’s most populous Muslim-majority country, where a spike in attacks on minorities has eroded a reputation for pluralism, and analysts said the decision was a “setback.”

Religious groups had demanded that Purnama, known by his nickname Ahok and Jakarta’s first non-Muslim leader in half a century, be prosecuted for allegedly insulting the Quran while campaigning in elections for the governorship.

The governor—currently favorite to win the polls—had accused his opponents of using a Quranic verse, which suggests Muslims should not choose non-Muslims as leaders, in order to trick people into voting against him. The blasphemy allegations sparked much anger among Muslims—both moderate and hardline—and more than 100,000 protesters took to the streets in Jakarta on Nov. 4 demanding that Purnama be prosecuted, with the demonstration later turning violent.

After a lengthy investigation that involved questioning scores of witnesses, national police chief detective Ari Dono told reporters: “Basuki Tjahaja Purnama has been named a suspect.” National police chief Tito Karnavian conceded there were “sharply dissenting opinions” and the decision was not unanimous, but added investigators had eventually concluded the case should go to trial.

Naming someone a suspect is a formal step in the Indonesian legal system that means authorities believe they have enough preliminary evidence to consider filing charges.

Purnama, who could be jailed for up to five years if found guilty under Indonesia’s blasphemy laws, pledged not to pull out of the Jakarta election in February following the announcement. “This is not the end, there will be a court process which we hope will be open,” he said, urging his supporters to back him in the vote.

A spokesman for President Joko Widodo, an ally of Purnama, urged all involved to respect the legal process.

Observers expressed surprise at the decision—police had been expected not to pursue the case as the evidence was viewed as weak—and said it could be a compromise to avoid further violence. “This is a calculated move by the government and police,” Tobias Basuki, a political analyst from Jakarta-based think tank the Center for Strategic and International Studies. However, he added, the decision marked a “huge setback for Indonesia.”

The demonstration earlier this month, which was the biggest in recent years in Indonesia, was peaceful during the day but as night fell descended into chaos, with hardliners torching police cars and hurling rocks in the heart of Jakarta. Scores of police officers were injured and one man died in the clashes close to the presidential palace.

Purnama has apologized for his remarks made in September, saying he was criticizing his political rivals who were using the verse rather than the Quran itself. However his election opponents—the son of an ex-president and a former cabinet minister—seized on the remarks and have faced accusations of whipping up popular anger as they seek to stop him winning a second term.

Widodo, who was forced to cancel a trip to Australia after the unrest, has accused “political actors” of fanning the violence.

Purnama won huge popularity with his no-nonsense style and determination to clean up Jakarta, a crowded, polluted metropolis of 10 million, but his once enormous poll lead has dwindled to a few percentage points since the blasphemy scandal broke. The protests against Purnama have often taken on anti-Chinese overtones in a country where the minority regularly faces discrimination. In 1998, many ethnic Chinese Indonesians were killed in the rioting that preceded the fall of long-serving dictator Suharto.