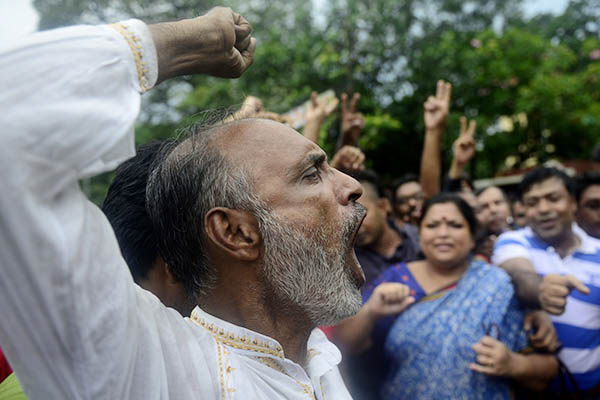 Toughening of sentence handed down to Abdul Qadeer Molla has triggered fresh protests by Islamist party.

Abdul Quader Molla, 65, the fourth-highest leader of the Jamaat-e-Islami party, had been given a life sentence in February by Bangladesh’s International Crimes Tribunal. Since January the tribunal has convicted six Islamists of crimes related to the 1971 war, in which pro-independence fighters battled Pakistani forces, which were helped by local Islamist leaders.

Molla’s life sentence had sparked deadly protests and widespread riots and there was fresh unrest on Tuesday as he was sentenced to hang, with Jamaat supporters torching vehicles in Chittagong.

Molla was convicted of rape, murder and mass murder including the killing of more than 350 unarmed Bengali civilians, a poet and a top journalist during the war when he was a physics student at Dhaka University. Prosecutors described him as the “Butcher of Mirpur,” a Dhaka suburb where he committed most of the atrocities.

Defense lawyer Tajul Islam said: “We are stunned by the verdict. This is the first time in South Asian judicial history that a trial court sentence has been enhanced by a Supreme Court.”

Islam said the defense would seek a review of the verdict in their final attempt to avoid hanging, which the prosecution said could be carried out later this year once all legal appeals have been exhausted.

Jamaat has accused the country’s secular government of trying to execute its entire leadership, three of whom have been sentenced to death by the war crimes court. A dozen others are being tried for their roles during the war. The government maintains the trials are needed to heal the wounds of the conflict.

Bangladesh has struggled to come to terms with its violent birth.

The government says three million died during the war while independent estimates put the death toll at between 300,000 and 500,000.

The latest verdict could further inflame political tensions in the country, about four months before it holds elections. The main opposition party, an ally of Jamaat, leads in opinion polls.

In August the High Court declared the registration of Jamaat-e-Islami illegal, banning it from contesting the general elections due in January.

The original life sentence passed in February also triggered protests from secular activists who had considered it too lenient. Tens of thousands of secularists massed at a square in Dhaka for weeks afterwards, demanding his execution. The protests forced parliament to change the law governing war crimes prosecutions, allowing prosecutors to appeal against the verdict and seek the death penalty in the Supreme Court.

Hundreds of secular protesters cheered as news of the latest verdict reached the capital’s Shahbagh Square where they had massed since dawn. “The Supreme Court judgment reflects the victory of the people who spent months on the roads to seek justice for the 1971 war crimes,” said Imran Sarkar, who had led the secular protest to seek death for Molla.

Unlike other war crimes courts, the Bangladesh tribunal is not endorsed by the United Nations. New York-based Human Rights Watch has said its procedures fall short of international standards.