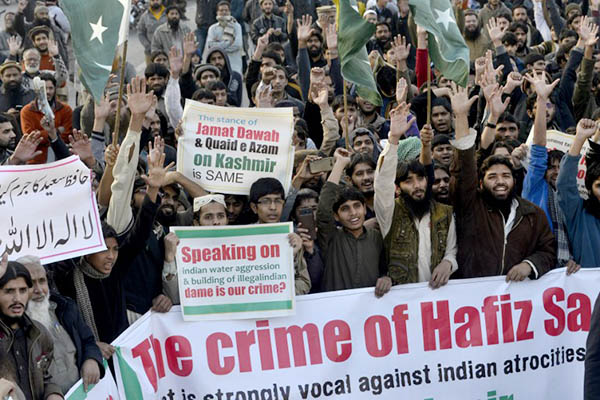 A militant group held protests across Pakistan on Tuesday after its leader Hafiz Saeed, one of the alleged masterminds of the 2008 Mumbai attacks, was put under house arrest following years of foreign pressure.

Firebrand cleric Saeed, who heads the Jamaat-ud-Dawa group and has a $10 million bounty on his head, was placed under “preventative detention,” according to an order from the interior ministry. Police took Saeed away from a mosque in Lahore late Monday and escorted him to his residence, hours after Interior Minister Chaudhry Nisar had hinted action against him was imminent.

But India on Tuesday expressed skepticism at the move. “Exercises such as yesterday’s orders against Hafiz Saeed and others have been carried out by Pakistan in the past also,” a foreign office statement said. “Only a credible crackdown on the mastermind of the Mumbai terrorist attack and terrorist organizations involved in cross-border terrorism would be proof of Pakistan’s sincerity.”

Dawa, listed as a terror outfit by the United Nations, is considered by the U.S. and India to be a front for Lashkar-e-Taiba, the militant group blamed for the attack on Mumbai, which killed more than 160 people.

Protests by the group’s followers broke out in some major cities on Tuesday afternoon. Some 300 Dawa activists staged a demonstration in Islamabad, burning the flags of India and the United States, while a similar number protested in Multan.

In Pakistan-administered Kashmir, the group staged a joint rally with the Hizbul Mujahideen militant group. “Kashmiris see Hafiz Saeed as their messiah and they will continue his mission. The government of Pakistan should behave and release him immediately,” said Abdul Aziz Alvi, a local Dawa leader.

Dawa has also announced it will challenge in court the detention order, which places the group and a foundation tied to it on a watch list and also places four other men under arrest.

Islamabad has not officially commented on the move’s timing.

Following a brief period of house arrest in 2008, Saaed led a high-profile public life and regularly delivered fiery anti-India speeches. Dawa has operated freely across the country and is popular for its charity work, especially in the wake of natural disasters. But a senior security source based in Islamabad said the decision was in response to U.S. pressure as well as a global perception that Pakistan has refused to tackle Islamist groups, which pose no risk at home but carry out attacks abroad.

“Yesterday’s actions were in fact a huge event,” he said. “There’s been increasing U.S. pressure on the issue, which compelled Pakistan to take this action. There has also been Indian pressure. They have always said unless you take certain steps things can’t move forward. So the move effectively kills two beasts with one arrow. Now India won’t have a chance to say, ‘Pakistan isn’t serious’.”

Amir Rana, a security analyst, said Islamabad had come to realize it was facing increasing isolation over its alleged dealings with proxy fighters. “There was some stress on Pakistan’s foreign policy especially around this group,” he said.

Rana added that though Dawa had ties to militancy, it was in the process of converting itself into a political movement and the threat of a violent backlash was low.