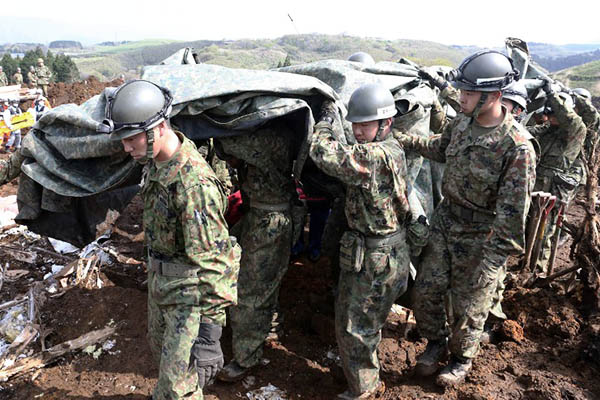 Japan on Monday enlisted U.S. help to airlift supplies to some of the 100,000 people made homeless by earthquakes in the country’s south, as rescuers struggled to find those still missing in a massive landslide.

Many of those evacuated after their homes were damaged or destroyed have had to sleep in temporary accommodation or huddle in makeshift shelters, and media have reported problems in delivering food and other essentials.

The disaster-prone country’s worst humanitarian challenge since 2011—when a quake, tsunami and then nuclear meltdown hit the northeast coast—has left 44 dead as of early Tuesday, Jiji press reported, and more than 1,000 injured.

Prime Minister Shinzo Abe said the government was working to find survivors and care for the displaced, and that the U.S. military had sent aircraft to help with the daunting relief effort.

“Many people are spending anxiety-filled days at evacuation facilities,” he told reporters. “We will continue to offer hands-on assistance to the individuals affected.”

Around 10,000 people are staying in their cars at an exhibition hall parking lot in the town of Mashiki, but emergency supplies have not been delivered as the facility is not registered as a shelter, Fuji television said. In another case, volunteers sent supplies and the military brought six tons of water to a hospital in Kumamoto city after a doctor complained on Facebook that there was not enough water or food for patients. “Thanks to this, we don’t have to worry about water to wash hands after treating patients,” doctor Takeshi Hasuda said.

Kumamoto’s mayor took to Twitter on Monday to apologize to the “many voices” who had complained about delays in providing help. “Please be patient,” Kazufumi Onishi wrote, promising that the situation would quickly improve.

The disaster comes at a particularly sensitive time for Abe, just months ahead of elections for the upper house of parliament.

Up to 25,000 Japanese military and other personnel have fanned out through villages where scores of traditional houses have been left in ruins by Saturday’s 7.0 magnitude quake, which struck a part of Japan not used to such tremors. A number of people are still missing, feared engulfed by landslides, after earthquakes struck the island of Kyushu.

Kazuya Shimada, 63, a resident of the landslide-ravaged village of Minami-Aso, said that he had evacuated to another town as his home was uninhabitable. “Not a single tile is left on the roof,” Shimada said. “I have never seen a landslide like this before,” he told AFP. “I had never worried about this before, living here.”

Villages in remote mountainous areas have been completely cut off by slippages and damage to roads.

The U.S. military, which has almost 50,000 servicemen and women stationed in Japan, is also taking part in rescue activities. Tilt-rotor Osprey aircraft were flying to the disaster zone after arriving at a U.S. Marine airbase to take part in relief efforts, officials said.

“The capacity of the Osprey, with vertical takeoff ability, is necessary to swiftly carry supplies to those who are isolated or facing serious traffic congestion,” Defense Minister Gen Nakatani said Monday.

More than 500 earthquakes have rocked Kumamoto and other parts of central Kyushu since Thursday, stoking fears that houses not damaged in the two major quakes could yet be affected. Five airlines including All Nippon Airways and Japan Airlines said they will resume flights to Kumamoto Airport on Tuesday, Jiji press reported, quoting transport minister Keiichi Ishii as saying this will help accelerate reconstruction efforts.

But flights from the airport remain suspended, Jiji said, as damage from the quakes, including the collapse of ceilings in the airport’s terminal buildings, meant it was unable to carry out security checks.

Japan is one of the world’s most seismically active countries, sitting on the so-called ‘Ring of Fire’ around the Pacific tectonic plate. A huge undersea quake in March 2011 killed around 18,500 people when it sent a devastating tsunami barreling into the northeast coast, sparking a nuclear disaster at Fukushima.

Authorities were lashed for their response to the meltdown, faulted in particular for confusion as the crisis unfolded as well as the handling of evacuees from stricken areas.