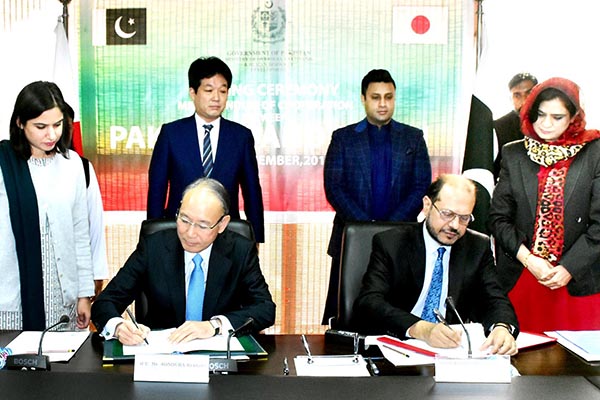 Under Memorandum of Cooperation, 14 sectors will be opened up for Pakistan’s workforce

Pakistan and Japan on Monday signed a Memorandum of Cooperation that would allow skilled Pakistani workers to secure employment in the East Asian island nation.

Ministry of Overseas Pakistanis and Human Resource Development Secretary Aamir Hasan and Japanese Ambassador to Pakistan Kuninori Matsuda inked the agreement, which envisages opening up 14 Japanese sectors for Pakistan’s workers, including construction, information technology, nursing, manufacturing and engineering. “We need to sign this framework to hire Pakistani labor,” announced the Japanese ambassador at the signing, “as Japan is currently facing a serious shortage of workers due to an aging society and shrinking population.”

He said Japan was currently developing a new work visa policy as it expected to welcome around 340,000 skilled workers from across the world, including Pakistan, to make up shortfalls in its domestic labor market.

“I always feel happy to bring good news when it comes to Japan-Pakistan relations, but today is truly special as the signing of this MoC is definitely a big step in the promotion of ties between Pakistan and Japan,” said the ambassador. He said the framework decided in the agreement would not only provide job opportunities for skilled Pakistanis, but would also create new vistas for robust bilateral cooperation. Under this framework, said Matsuda, there would also be greater opportunities for Japanese companies to invest in Pakistan, and vice versa.

The ambassador encouraged Pakistanis to learn the Japanese language, saying this would significantly boost their employment potential. He said education was a key sector that Tokyo wished to help Islamabad with, adding the Japanese embassy would create a network of Japanese language programs to encourage people-to-people exchanges and help students that wished to pursue studies in Japan.

Speaking at the event, secretary Hasan said Pakistan had, up till now, only sent 1,600 workers to Japan through the Bureau of Emigration and Overseas Employment. “The signing of this MoC would formalize export of Pakistani manpower,” he added.

Hasan said around 96 percent of the manpower currently exported by Pakistan was to Gulf nations. He said Islamabad hoped to diversify this, adding the memorandum would surely help, as Tokyo was destined to be a potential market for the Pakistani workforce.

Special Assistant to the Prime Minister on Overseas Pakistanis Sayed Zulfikar Bukhari said the inking of the agreement was a groundbreaking moment for both Pakistan and Japan, as it would foster relations between the two nations. “Both countries have similar culture and sublime values, especially toward the elderly,” he said, adding he hoped this would help Pakistanis wishing to seek employment in Japan.

Bukhari said the memorandum was a great boon for both countries, as while Japan was facing an aging population, 65 percent of Pakistan’s population was under 35. “We will provide you our best quality workforce,” he said, as he urged Japanese officials to ensure the best care for Pakistanis in their country.

Japan’s Special Advisor to the Prime Minister for Foreign Affairs Sonoura Kentaro told the signing ceremony that Pakistan and Japan had established good relations for the last 70 years. He said Japan wished to further enhance ties between the two countries.

how to apply? where do I follow this stuff?

You can send your documents at saj@i2bits.co.uk to help us for applying to Japan

I look forward from this great opportunity between the two countries relationships,I would definitely be interested in the coming jobs in japan,

Kindly keep me updated……Thank you

How is the application process delt with ???

When will the visa’s be initiated ???

Where does one go to and to whom does one speak regarding this matter ????

Please let me know. Thanks.

Pakistan will get a lot of benefits from these opportunities. I hope these new doors will have a good influence on electronics industry. Are these programs just offering jobs and internships or there is also an opportunity for entrepreneurs and industrialists?

Is there any position relevant to IT? I have seen the forum but not found anything about IT, digital marketing, web development …

how to apply? where do I follow this stuff

plz Give us the Original Main Process for the Apply, plz Pakistan Govt, ????????

Can overseas Pakistanis also apply for these positions in Japan.
Or is it only current Pakistani residents eligible.
I am sure the pay is higher in Japan as compared to other countries.
Will there be any Pakistani office in Japan helping new workers in Japan finding jobs and living arrangements?
Regards,
syed

I would also like to help Sayed Zulfi saab make arrangements with Canada and USA to formulate an agreement, so we can export young skilled and unskilled workers from Pakistan and secure employment in these two countries.
I think there is more potential in these two countries for our workers and increase remittances in dollars.
There is a good potential of exporting over one million workers to these high grossing countries.

i wanna know the deadline for applying this job

I am very much interested to learn japanese language and to work and live in Japan.

How is the application process delt with ???

When will the visa’s be initiated ???

Where does one go to and to whom does one speak regarding this matter ????

Please let me know. Thanks.

in need a job in japan plz hlpe me

Thanks Japanese and Pakistani government

I want work in Japan

I’m a student in MSC MATHEMATICS ,My degree will be completed soon . I have done my BSC (Double math and computer), got 65% . ICS with 72.90% and metric with 77.33%.
I don’t have any skill yet but I’m good in mathematics,computer and English . Is there any opportunity for me ??

It looks like great opportunity for all pakistanis brothers . I would be interested in need to know how to proceed further to start visa process .

I would like interest and apply for the I.T field etc.