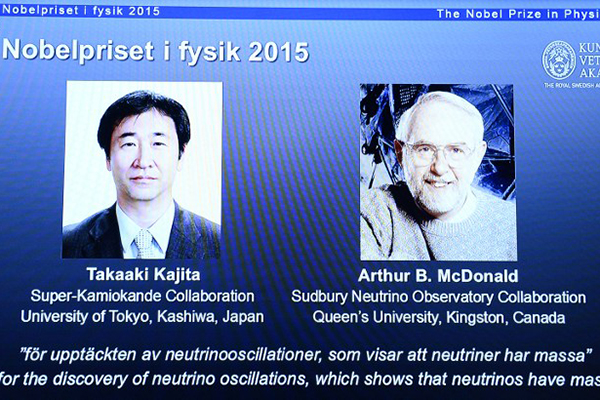 Takaaki Kajita and Arthur McDonald awarded for their work on neutrinos.

Takaaki Kajita of Japan and Arthur McDonald of Canada were awarded the Nobel Physics Prize on Tuesday for resolving a mystery about neutrinos, a fundamental but enigmatic particle.

The pair was honored for work that helped determine that neutrinos have mass, the Royal Swedish Academy of Sciences said. “The discovery has changed our understanding of the innermost workings of matter and can prove crucial to our view of the Universe,” it said.

The findings, it added, threw down a challenge to the so-called Standard Model—the conceptual model of the particles and forces of the cosmos.

Neutrinos are lightweight neutral particles that are created as the result of nuclear reactions, such as the process that makes the Sun shine. Next to particles of light called photons, they are the most abundant particles in the Universe. Their existence was tentatively proposed in 1930, but was only proved in the 1950s, when nuclear reactors began to produce streams of the particles.

The prevailing theory was that neutrinos were massless, but experiments carried out separately by teams led by Kajita in Japan and McDonald in Canada showed that this was not the case.

Many neutrinos blasted out from the Sun—a type called electron neutrinos—“oscillated” en route to become cousin particles called muon-neutrinos and tau-neutrinos, they found. Under the quirky rules of quantum physics, the identity change can only happen if the neutrinos have mass.

Intense activity is underway worldwide in order to understand more about the elusive particles. “New discoveries about their deepest secrets are expected to change our current understanding of the history, structure and future fate of the Universe,” the jury said.

The Nobel awards week continues on Wednesday with the announcement of the winners of the Nobel Chemistry Prize. The winner of the literature prize will be revealed on Thursday, while the peace prize will be announced in Oslo on Friday.

The economics prize will wrap up this year’s Nobel season on Monday.

The laureates will receive their prizes at formal ceremonies in Stockholm on Dec. 10, the anniversary of the 1896 death of prize creator Alfred Nobel, a Swedish philanthropist and scientist.