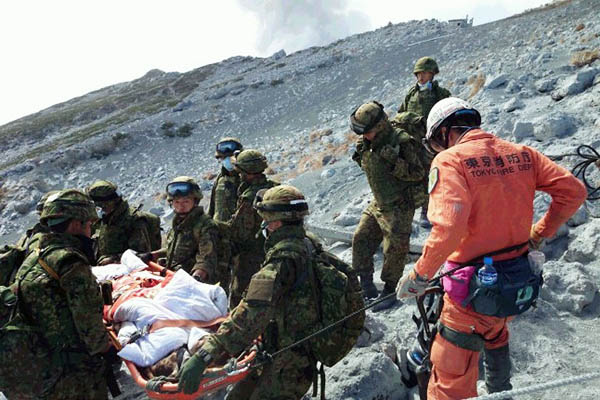 Volcanic tremors and fears over a fresh eruption forced rescuers with gas masks to halt operations to recover bodies from a Japanese mountain on Tuesday, 72 hours after its eruption.

Volcanologists warned of the possibility of another major explosion at the 3,067-meter Mount Ontake, noting tremors have become larger. At least 36 people are known to have died in the eruption, with the bodies of 24 of them still on the volcano. About 60 people suffered injuries.

“Ground search operations resumed at 6:20 a.m. but were suspended at 7:05 a.m. due to volcanic tremors,” said a crisis-management official at the Nagano prefectural government. “Rescue workers started climbing and they are on standby,” he said, adding the exact number of rescue workers on the volcano was not immediately available.

A spokesman at the Nagano prefectural police confirmed officers were ready to resume their search as soon as conditions allow. “They are standing by while being prepared to evacuate in any emergency,” he said.

The mountain erupted without warning during a busy hiking weekend, spewing gas, rocks and ash high into an autumn-blue sky. Hundreds of hikers were caught on the slopes of the volcano, with dozens trapped on the peak by flying rocks and hot, toxic gases.

Steam and sulfurous gases continued Tuesday to billow from the ruptured crater of Japan’s second-highest active volcano. Volcanic tremors have been detected repeatedly since Saturday’s eruption, with underground water boiling into steam and breaking or moving rocks, a volcanologist at the meteorological agency said.

“The shakes have became bigger [since early Tuesday], prompting worries over possible secondary casualties” if there is a fresh explosion, he said.

Search operations have been hampered throughout by rocketing levels of poisonous gas pouring from the volcano. More than 800 firefighters, police and troops were set to be engaged in the search on Tuesday.

A Japanese army official who took part in the search has said rescuers have been wearing helmets, bulletproof vests, goggles and masks to protect themselves from any fresh eruption. The meteorological agency has warned that volcanic debris may settle as far as four kilometers from the peak.

Pakistan Extends ‘Lockdown’ Till May 9