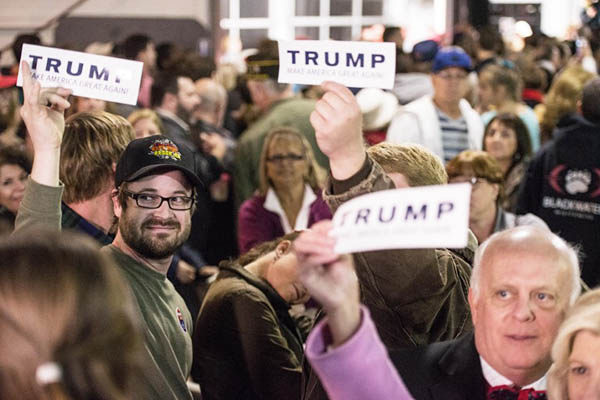 Rhetoric has prompted backlash with many global leaders condemning rise of ‘toxic’ discourse.

From a call to bar Muslims from the United States to proclaiming Western culture as superior to Islam, recent jihadist attacks have sparked a startling rise in anti-Muslim rhetoric—and an equally robust response.

Leading the way is Donald Trump, the 69-year-old American billionaire candidate for the Republican presidential nomination, who has reveled in headline-grabbing controversy since hitting the campaign trail. Trump urged a “total and complete shutdown of Muslims entering the United States” after a Muslim couple, said to be self-radicalized, shot dead 14 people in a rampage in California.

On the other side of the world, deposed Australian prime minister Tony Abbott picked up the torch, telling the Sydney Daily Telegraph: “We can’t remain in denial about the massive problem within Islam.” The staunch Catholic—once dubbed the “Mad Monk”—urged the West to “be ready to proclaim the clear superiority of our culture to one that justifies killing people in the name of God.”

And in France, the far-right National Front (FN) has seized on last month’s jihadist attacks in Paris that killed 130 people to ramp up its rhetoric against the Muslim community in France—Europe’s biggest. One of the rising stars of the party, 25-year-old Marion Marechal-Le Pen, touched off a hail of criticism with comments made in Toulon, a Mediterranean city home to many residents of Arab descent.

“We are not a land of Islam… In our country, we don’t wear djellaba clothing, we don’t wear a veil and we don’t impose cathedral-sized mosques,” she said. The country’s five million Muslims could only be French “if they follow customs and a lifestyle that has been shaped by Greek and Roman influence and 16 centuries of Christianity,” she said.

The ramped-up rhetoric appears to be striking a chord with French voters. Elections at the weekend saw a record score for the FN that could put the party in power in several regions and give leader Marine Le Pen momentum for the presidential vote in 2017.

In the Netherlands, firebrand anti-immigrant politician Geert Wilders said he hoped Trump would win the U.S. presidency. “Good for America, good for Europe,” he tweeted. “We need brave leaders.”

The sharpening in anti-Muslim rhetoric has prompted a fierce counter-reaction, with Trump first in the firing line. London mayor Boris Johnson dismissed Trump’s “ill-informed” remarks as “complete and utter nonsense.”

Trump suggested there were parts of the British capital that were so “radicalized” that police feared to tread—and found himself on the end of Johnson’s famously acerbic wit. “Crime has been falling steadily both in London and in New York—and the only reason I wouldn’t go to some parts of New York is the real risk of meeting Donald Trump,” said Johnson.

A petition on the House of Commons website to bar Trump from entering Britain had garnered more than 230,000 signatures Wednesday—enough to force M.P.s to consider debating the issue.

White House spokesman Josh Earnest also attacked Trump on a personal level, deriding him as a “carnival barker” with “fake hair.” With his “offensive” and “toxic” comments, Trump has effectively barred himself from the race for the White House, Earnest said.

Australian Prime Minister Malcolm Turnbull admonished his predecessor Abbott for his remarks, arguing: “What we must not do is play into the hands of our enemies and seek to tag all Muslims with responsibility for the crimes of a few.” And French Prime Minister Manuel Valls said French Muslims needed to be protected against “the confusion we’re hearing on the other side of the Atlantic,” in reference to Islamophobic suggestions that all Muslims are somehow responsible for jihadist attacks.

Even Harry Potter author J.K. Rowling stormed into the debate, comparing Trump unfavorably to one of her more notorious villains. “How horrible. Voldemort was nowhere near as bad,” she tweeted.