Jimmy Carter Says Cancer Has Spread to His Brain 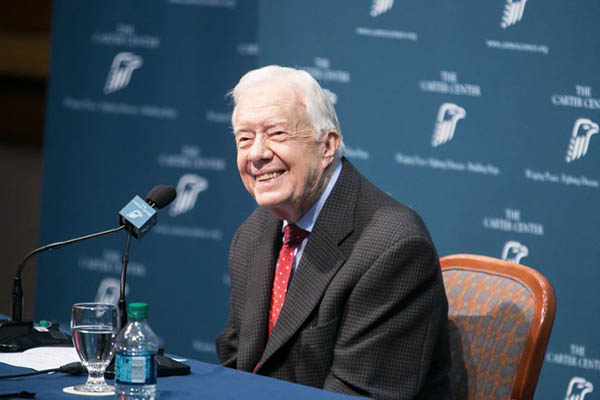 Former U.S. president says he has started radiation treatment for melanoma and is grateful for ‘full life.’

Jimmy Carter, the former U.S. president turned Nobel peace laureate and global humanitarian, revealed Thursday he has cancer on his brain but said he feels at peace and grateful for having lived a full life.

The 90-year-old Carter told a press conference that the finding of the four melanoma spots stemmed from a procedure in which a tumor was removed from his liver earlier this month. “They did an MRI and found that there were four spots of melanoma on my brain,” Carter told reporters in Atlanta. “I get my first radiation treatment for the melanoma in my brain this afternoon.”

Carter said that as his treatment continues, it is likely doctors will find cancer elsewhere in his body.

Melanoma usually shows up in the skin, but a small percentage of cases are internal, Carter said his doctors had told him. It is a very aggressive form of cancer.

The 39th president sounded quite serene and in high spirits as he discussed his illness. He joked with reporters and smiled often, his Georgia drawl still pronounced. Carter, a former peanut farmer who only served one term in office from 1977 to 1981, is arguably better known for his decades of humanitarian work around the world since leaving the White House.

“I feel good. I haven’t felt any weakness or debility,” Carter said, adding he said he plans to carry on teaching Sunday school and hopes doctors will allow him to travel to Nepal with Habitat for Humanity.

Carter said he has received well-wishing phone calls from a host of powerful people, including President Barack Obama, Vice President Joe Biden, former president Bill Clinton and his wife and presidential hopeful Hillary, and both former presidents Bush. “First time they’ve called me in a long time,” Carter joked, drawing guffaws at a news conference that seemed almost light-hearted—not an unusually frank explanation by a former president of cancer that could spread.

Carter said that after doctors diagnosed the melanoma in his brain, he initially thought he was quickly nearing the end of his life, but was still at ease. “You know, I have had a wonderful life. I have got thousands of friends and I have had an exciting and adventurous and gratifying existence,” Carter said. “So I was surprisingly at ease, much more so than my wife was, but now I feel, you know, it’s in the hands of God… and I’ll be prepared for it when it comes,” Carter said.

Carter explained that in May he had gone to Guyana in South America to monitor elections but fell ill with a bad cold and cut his trip short.

Doctors did a complete physical and detected a growth on his liver that might be cancer. In August, doctors removed a tenth of the organ—the growth did turn out to be malignant—and, suspecting it might have originated elsewhere, did an MRI and found melanoma on his brain.

When Carter first learned of the growth in late May, he did not tell his wife Rosalynn right away. “I think I put in my diary that I didn’t tell Rosalynn until about the 15th of June,” Carter said.

Several of Carter’s relatives died of pancreatic cancer, but that tends to show up earlier in life. His melanoma is probably related to his light complexion and lots of time spent outdoors, said Jeffrey Schneider, an oncologist at Winthrop-University Hospital in Mineola, New York.

Carter’s term in office is perhaps best known for the Iran hostage crisis, which saw 52 Americans held in Tehran for 444 days following the Islamic Revolution. Carter’s failure to secure their release, compounded by a failed military rescue attempt, would dog his presidency and scuttle his bid for a second term.

Carter was asked Thursday about the highs and lows of his life. He said the best thing he ever did was marry Rosalynn, and that it was also an honor to have served as president.

As for regrets, he mentioned the hostage crisis. “I wish I had sent one more helicopter to get the hostages and we would have rescued them—and I would have been re-elected,” Carter joked, drawing more hearty laughter.

Indeed, Carter’s reputation is much stronger today than it was when he left office. Reaching a peace deal between Israel and Egypt is now recognized as the zenith of his presidency and a major diplomatic achievement.

But his work after leaving the White House has also been widely praised. He has been extremely active as an ex-president, working as an elections monitor and lobbying for health campaigns via the Carter Center, which he founded in 1982.

He has participated in election monitoring in Mexico, Peru, Nicaragua, Venezuela and East Timor, and in 2003 traveled to Cuba for a historic face-to-face meeting with longtime communist leader Fidel Castro. He was recipient of the 2002 Nobel Peace Prize for his tireless efforts to promote social and economic justice.