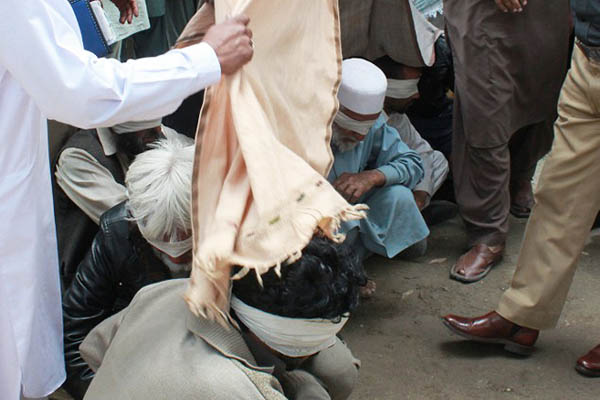 Police cover members of the accused jirga as they arrive at a court in Abbottabad. Shakeel Ahmed—AFP

Pakistan’s tolerance is rising—for crimes in the name of ‘honor’ and ‘justice.’

Pakistan was outraged Thursday when the police of Hazara division, Khyber-Pakhtunkhwa, revealed that a 15-member, all-male village jirga had handed down death on April 28 to a teenaged girl because “she had helped a friend elope with her lover.” No one apparently objected to the way the “verdict” was arrived at. Ambreen was strangled then placed inside a vehicle, which was set ablaze in the name of justice.

The police said the 15 jirga men were not really a jirga but a gang of hoods who wanted to punish little Ambreen. In Abbottabad, most people expressed outrage over the ghastly crime but some tended to accept the concept of “jirga of the elders” they thought above suspicion. A local government representative actually defended what she kept calling a “normal” jirga.

The Hazara division seems vulnerable to this kind of inhumanity. Four years ago, a jirga of elders in the Kohistan district condemned four women and two men to death for “staining the honor” of their families, relying on a video showing them “dancing together” at a wedding party. It didn’t take long to discover that this “rough justice” was a rival’s scheme to destroy a stronger and more affluent family.

In 2012, in Jacobabad, Sindh, a member of Pakistan’s National Assembly was found guilty of presiding over a jirga that decided to hand over five minor girls for marriage to a family to “compensate” for a murder. Punjab is not exempt from this madness either. Pakistan’s name was globally mud in 2005 when a panchayat or council in South Punjab got housewife Mukhtar Mai gang-raped to satisfy a party it favored because of its local influence. Instead of coming to the help of the victim, the police freed the rapists and took her into custody. Later, Mukhtar Mai became a global celebrity, writing a book on her experience, and highlighting the decline of Pakistan into its tribal hell.

Last month, a parallel string of jirga-like courts came to light being run from their headquarters in Lahore deciding all kinds of cases, including murder. The nation was shocked, but nothing happened, not even a suo motu from the apex court. Not only has Pakistan failed to detribalize its population as a part of its nation-building mission, its urban centers are sliding back into judicial non-governance.