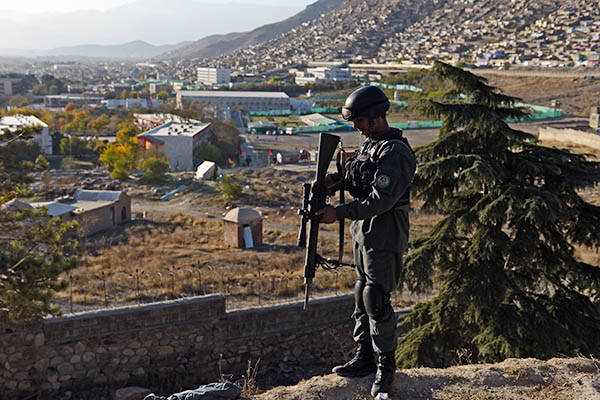 A draft agreement provided by Kabul states it has agreed to a U.S. demand that American troops not be tried in local courts if accused of crimes.

Afghan tribal chieftains, community elders, and politicians gathered in Kabul on Thursday for the start of a grand assembly to debate a crucial security deal with the U.S. The loya jirga will over the next four days discuss, approve, or reject the Bilateral Security Agreement, a major security pact that will shape Washington’s future military presence in Afghanistan.

Taliban militants leading the 12-year insurgency against the government of President Hamid Karzai and its foreign backers have condemned the meeting as an American plot, and threatened to target its delegates if they approve the deal. Highlighting the threat, last week a suicide bomber detonated a car bomb near the jirga area, killing 12 people, most of them civilians.

Just hours before the gathering, U.S. Secretary of State John Kerry said the two sides had agreed on the text of the pact in a slew of phone conversations with Karzai. A draft text released by Kabul appeared to show Karzai had bowed to a U.S. demand that American troops would not be tried in local courts if they are accused of crimes—an issue that became a big hurdle in the negotiations.

The BSA is seen as vital to security in the war-torn nation, where the Islamic Taliban insurgency this year has reached levels of violence not seen since 2010, according to the United Nations. A similar deal between the United States and Iraq collapsed in 2011 over the issue of whether American troops would be answerable to local courts, leading Washington to pull its forces out.

But the draft text, published on the Afghan foreign ministry website, said Kabul had agreed that the United States should have “the exclusive right to exercise jurisdiction” over its forces in Afghanistan. “Afghanistan authorizes the United States to hold trial in such cases, or take other disciplinary action, as appropriate, in the territory of Afghanistan,” it said. According to the draft, the deal will remain in force “until the end of 2024 and beyond,” unless either side ends it.

The issue dogged the negotiations with Kabul, leading some to fear the Iraq “zero option” would be repeated and the country would plunge deeper into violence as local forces struggled to quell the Taliban. It remains unclear how many U.S. troops will stay on after the majority of NATO forces, currently numbering 75,000, pull out by the end of next year.

Kerry said the remaining forces would have “a very limited role, it is entirely to train, equip, and assist. There is no combat role for U.S. forces.” Afghan officials have said up to 16,000 could remain, but the announcement is expected to come separately from U.S. President Barack Obama.

The draft deal also said that while American military operations against Al Qaeda may be “appropriate” in the fight against terrorism, the two sides would cooperate closely to protect U.S. and Afghan interests “without unilateral U.S. military counterterrorism operations.” There was no explicit mention of another sticking point, on whether U.S. troops will be able to search Afghan homes. Aimal Faizi, Karzai’s spokesman, told reporters in Kabul on Tuesday that it had been agreed that U.S. forces could search homes, but only in “extraordinary circumstances” where there was an urgent risk to life.