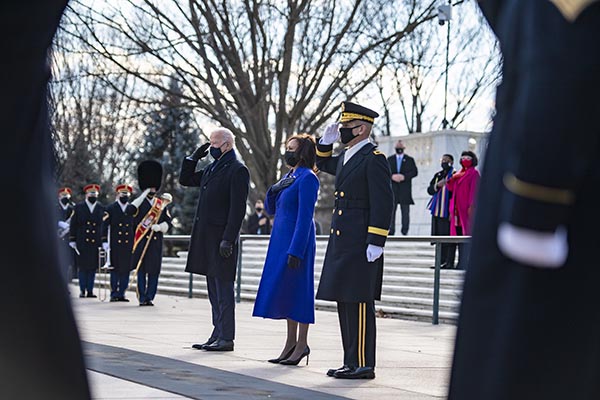 After being sworn in as the United States’ 46th president on Wednesday, Joe Biden invoked President Abraham Lincoln in his inaugural address, asking people to come together and end the “uncivil war.”

The 78-year-old Biden’s election has proven divisive in the U.S., resulting in a siege of the Capitol earlier this month that drew comparisons to the Civil War and the Great Depression.

“On this January day my whole soul is in this. Bringing America together. Uniting our people. Uniting our nation. And I ask every American to join me in this cause,” Biden said in his address. “We must end this uncivil war that pits red against blue, rural versus urban, conservative versus liberal. We can do this if we open our souls instead of hardening our hearts. If we show a little tolerance and humility and if we’re willing to stand in the other person’s shoes.”

Biden did not shy from acknowledging and attack on the Capitol—at least 300 people have been identified as suspects and more than 90 arrested—contrasting the violence of two weeks ago with the Inauguration Day where “we come together as one nation, under God, indivisible to carry out the peaceful transfer of power.”

He also admitted the heightened emotions surrounding the election, assuring citizens who didn’t support him that he would work for them just as he would those who had voted him into power. “For all those who did not support us, hear me out as we move forward take a measure of me and my heart and if you still disagree so be it, that’s democracy, that’s America—the right to dissent peacefully,” he said. “I will be a president for all Americans.”

Biden also acknowledged that many people viewed the future with “fear and trepidation” because they were worried about jobs and how they’d pay their bills—especially in the wake of the coronavirus pandemic and a resulting economic slowdown. But he encouraged people to go forward with the gusto and courage at the heart of the American way. “The American story depends not on any one of us, not on some of us but on all of us. This is a great nation. We are good people,” Biden said. “Our better angels will prevail … We will master this rare and difficult hour … When we do we’ll write the next great chapter in the history of the United States of America.”

The 56-year-old Harris, who is of Indian-Jamaican heritage, initially ran for the Democratic nomination but lost to Biden, who then chose her as his running mate.

Prior to taking the oath at the U.S. Capitol, Harris paid tribute to the women who she says came before her in a posting on Twitter. “I stand on their shoulders,” she said in a video shared on her official account.

Soon after taking charge as the 46th president, Biden issued orders to reverse a number of Donald Trump’s divisive policies, including returning to the World Health Organization, rejoining the 2015 Paris climate pact and rescinding a Muslim travel ban.

“We are going to combat climate change in a way we have not done so far,” the new U.S. leader said in the Oval Office as he signed papers on the Paris deal, which was negotiated by Barack Obama when Biden was his vice president. The president also stopped construction of Trump’s wall on the Mexican border.