Johnny Depp Ordered to Stay Away From Wife Over Abuse Claim 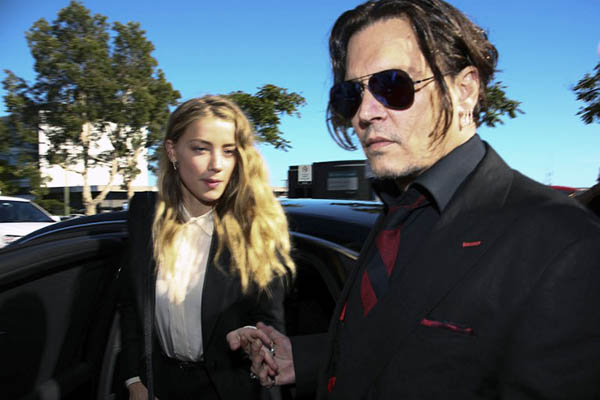 Amber Heard has alleged that the Hollywood star verbally and physically abused her throughout their relationship.

Johnny Depp was hit with a restraining order on Friday after his wife appeared in court with a black eye, accusing the Oscar-nominated star of assaulting her.

Amber Heard, who filed for divorce in Los Angeles earlier this week and is seeking spousal support from the 52-year-old Pirates of the Caribbean star, says she is the victim of repeated attacks by Depp.

Heard submitted pictures to the court showing a bruise on her face that she claims was inflicted during a fight between the couple on Saturday and said she feared Depp might harm her. “During the entirety of our relationship, Johnny has been verbally and physically abusive to me,” she said in a sworn statement.

She added that Depp has a “totally acknowledged public and private history of drug and alcohol abuse” and that she was scared of his temper.

Celebrity news website TMZ published a picture showing Heard with bruising around her right eye. It reported that the actress says it was taken shortly after Depp hurled his iPhone at her face on Saturday night. “Heard claims after he allegedly hit her, he offered her money to stay quiet, but instead she filed for divorce first thing Monday morning,” TMZ said.

A spokesman for the LAPD told AFP that officers who showed up at their residence were not asked to take a complaint, nor was there any “evidence provided by the victim that warranted a report.”

“The police investigators concluded a crime had not occurred,” he said.

TMZ said Heard alleges she is facing an immediate threat of harm from Depp, even though the actor is in Europe promoting his new film Alice Through the Looking Glass, which was released on Friday.

Los Angeles Superior Court Judge Carl Moor ruled after reviewing 40 pages of evidence behind closed doors that Depp was banned from coming within 100 yards (91 meters) of Heard. The order will be reviewed on June 17.

Another of Heard’s attorneys, Joseph Koenig, said in a courthouse hallway that his client was dealing as well as possible with her recent ordeal. “She’s having a hard time, it’s been a long few days,” Koenig said.

Heard stayed in an attorney conference room around the corner from the courtroom while she awaited the ruling.

Depp’s attorney, Laura Wasser, declined to comment other than to say the petition was granted in part and denied in part. She did not elaborate.

The couple’s separation came less than a week after the death of Depp’s mother, Betty Sue Palmer, at the age of 81. The pair, who have no children together, have been embroiled in a spat with Australian Deputy Prime Minister Barnaby Joyce since Heard failed to declare the couple’s two dogs when they arrived in Queensland state a year ago.

Actress-model Heard last month admitted falsifying her immigration arrivals card and was placed on a $720 one-month good-behavior bond. Her divorce petition asks that she keep the couple’s house, a Range Rover and custody of the dogs, TMZ said.

The petition listed their date of separation as Sunday, two days after Depp’s mother died. “Given the brevity of this marriage and the most recent and tragic loss of his mother, Johnny will not respond to any of the salacious false stories, gossip, misinformation and lies about his personal life,” People magazine quoted Depp’s representative as saying in a statement. “Hopefully the dissolution of this short marriage will be resolved quickly.”

Depp and Heard met on the set of the 2011 film The Rum Diary, when Depp was still in a relationship with the French actress Vanessa Paradis, mother of his son Jack and daughter Lily-Rose. They married in a small, private ceremony in Los Angeles in February of last year before celebrating with a larger event on Depp’s private island in the Bahamas.

Celebrity news website Page Six, citing unnamed sources close to the pair, said the marriage hit the rocks after just three months. Depp “quickly grew tired of Heard’s enchantment with Hollywood glitz,” it said, and became increasingly suspicious over her bisexual past and closeness to her lesbian friends.

Saudi Arabia to Notify Women of Divorce by...