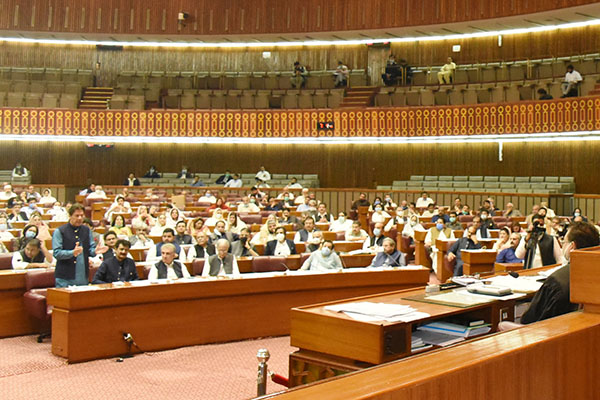 A joint session of Parliament on Wednesday passed amendments to three bills that the government claims are essential to fulfill the requirements of the Financial Action Task Force (FATF) and prevent Pakistan from being placed on a blacklist.

The session began in acrimony, as the opposition claimed their numbers had been miscounted and demanded a recount that was rejected by National Assembly Speaker Asad Qaiser. As clause-by-clause reading of proposed amendments began, the opposition staged a walkout to protest the government’s rejections of their proposals and over not being allowed to speak.

Three bills linked to the FATF were passed during the joint sitting. All three had earlier had been passed by the National Assembly but had subsequently been rejected by the Senate.

The legislation is aimed at the proper management, supervision, and administration of Waqf properties within the federal capital.

The bill aims to streamline the existing anti-money laundering laws in line with the international standards prescribed by the FATF. The government and opposition appeared to differ the most on this legislation. It has omitted clauses 8 and 9 and inserted the following clause: “The investigation officer may with the permission of the court, within 60 days of such permission, use techniques including undercover operations, intercepting communications, assessing computer system and controlled delivery of investigation of offenses of money laundering, associated predicate offenses and financing of terrorism. The aforementioned period of 60 days may be extended up to further period of 60 days by the court on a request made to it in writing.”

The bill’s primary focus is to curb terror financing, which is the primary concern of the FATF with Pakistan.

Additionally, as part of a supplementary agenda that took advantage of the opposition’s boycott, the joint sitting also passed The Surveying and Mapping (Amendment) Bill 2020, which seeks to prevent the printing, displaying, dissemination or use of any incorrect and unofficial map of Pakistan; The Islamabad High Court (Amendment) Bill 2019 which envisages increasing the number of judges appointed to the court from seven to 10 for early disposal of pending cases; The Pakistan Medical Commission Bill 2019 and The Medical Tribunal Bill 2019, which permits colleges to increase their fees and increases the number of exams doctors have to sit for prior to getting qualified; and The ICT Rights of Persons with Disability Bill 2020, which governs the rights and inclusion of differently-abled persons in society.

Following their boycott, the opposition leaders staged a joint press conference in which it criticized the manner in which the government had passed the legislations. PMLN leader Shahbaz Sharif said this was a “black day in the history of democracy,” and accused the government and National Assembly speaker of crossing all “red lines.” He added: “Until now, the opposition cooperated with the government for the sake of Pakistan.”

PPP chief Bilawal Bhutto-Zardai, meanwhile, slammed the government’s refusal for a recount, claiming it proved treasury members were “scared of being exposed.” He said the opposition’s only remaining option was a no-confidence motion and vowed that the upcoming all-parties conference would deliberate on this.