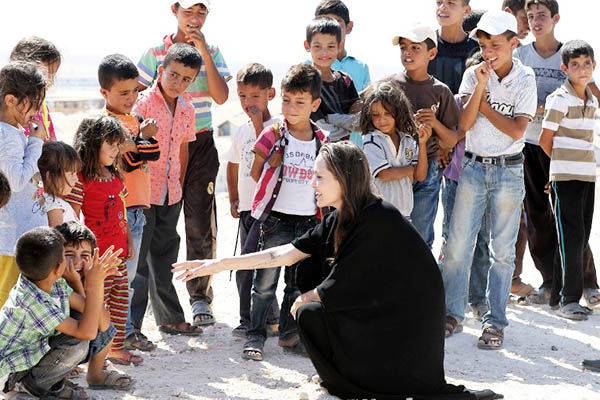 U.S. actress Angelina Jolie on Friday urged the international community to come to the rescue of tens of thousands of Syrian refugees stranded without humanitarian aid on Jordan’s border.

“Seventy-five thousand Syrians are stranded at the berm in no man’s land at the Jordanian border including children, pregnant women and gravely ill patients,” she told reporters during a visit to Azraq refugee camp, 100 kilometers northeast of the Jordanian capital Amman. “None of the basic protections under international law are being applied,” said Jolie, special envoy for the United Nations High Commissioner for Refugees (UNHCR). “This is not a problem of Jordan’s making, or that Jordan should be left to bear alone,” she said.

“Jordan has been warning for years that they could reach a point where they on their own could do no more,” said Jolie, who toured the windy desert camp in a black robe under a blazing sun. “The world has known about the situation on the berm for months but no solution has been put forward.”

On security grounds, Jordan has since June 21 blocked the passage of aid to the refugees and their entry after a suicide bombing claimed by the Islamic State jihadist group killed seven of its soldiers in the border area. Since then, humanitarian organizations have been able to send aid to the refugees just once, in early August, lifting it across the frontier using drones and cranes.

Jolie said the UNHCR and other agencies had received only half of the funds needed from donors to provide humanitarian assistance to refugees during Syria’s brutal five-year-old conflict.

Ahead of the U.N. General Assembly, which opens at the end of September, she urged world leaders “to ask the fundamental question of what are the root causes of the Syrian conflict and what it would take to end it. And please, put that at the center of your discussions.”

“Refugees want to know when can they get back to their home, they don’t want to be passive recipients of aid, they want a political solution,” Jolie said.

Jordan hosts more than 600,000 Syrian refugees according to the United Nations, a figure Amman puts at 1.4 million.