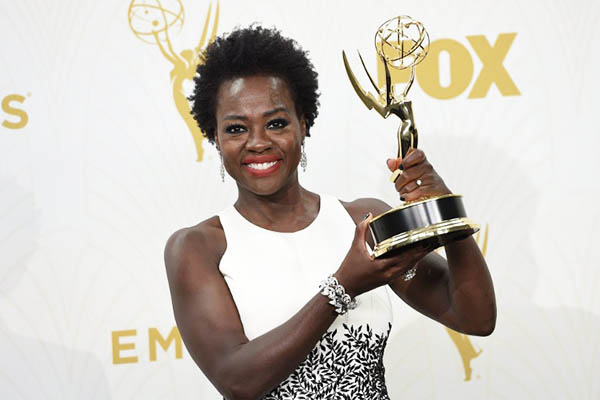 Viola Davis gave an emotional speech as she became the first African-American to win the award for best actress in a drama series for her portrayal of a law professor involved in a twisted plot on ABC’s How To Get Away with Murder.

Game of Thrones was the big winner at the star-studded ceremony in Los Angeles, raking in 12 awards, and HBO also struck gold with Olive Kitteridge, about a couple whose marriage is in trouble, which won eight trophies.

Thrones—a sweeping tale of clashing noble families filled with blood, sex and backstabbing, based on the novels of George R. R. Martin—had won many awards before, but never the top prize at television’s equivalent of the Oscars.

But the emotional high points of the night belonged to Hamm and Davis.

Hamm—whose portrayal of seductive, mysterious ad man Don Draper on retro-cool Mad Men had won him rave reviews and transformed his career—finally struck gold on his eighth nomination for the role. “It’s incredible and impossible for me personally to be standing here,” Hamm said after receiving a standing ovation from the audience at the 67th Emmys.

He later told reporters he felt no bitterness at being overlooked in past years given the quality of his fellow nominees. “I’m just glad to be here—look at the people I’m sitting next to,” he said.

For Davis, the moment was not one to be missed. “Let me tell you something,” she told the audience to wide applause. “The only thing that separates women of color from anyone else is opportunity.”

She paid tribute backstage to fellow black actress Taraji P. Henson, who was nominated for her role in Fox’s music melodrama Empire, saying both were gunning for the other to make history. “We whispered to each other, ‘Whoever gets it, it’s great’,” Davis told reporters. “If it’s been 67 years since an actress of color has won an Emmy [for best actress], then there’s certainly been a line, and it certainly has to be acknowledged, like the emperor being naked in the room,” she added.

Transparent, about a transgender woman and her family, won five Emmys overall for Amazon in its first year with nominations for its scripted content, as it tries to catch up with streaming pioneer Netflix. Jeffrey Tambor took home the trophy for best actor in a comedy for his starring role of a transgender woman. The series also took honors for directing, best guest actor in a comedy and for two technical categories.

In addition to top comedy series honors, Veep—the misadventures of a female U.S. vice president who rises to the presidency—saw its star Julia Louis-Dreyfus win for the fourth time in a row. Co-star Tony Hale won his second Emmy for best supporting actor in a comedy.

Louis-Dreyfus cracked a joke about Republican presidential frontrunner Donald Trump in her acceptance speech, saying, “It’s getting trickier and trickier to satirize this stuff.”

Host Andy Samberg kicked off the ceremony with a musical video skit about the wealth of quality television now on offer, featuring several stars like Hamm and Kerry Washington, the star of Scandal. Samberg—the star of Fox’s Brooklyn Nine-Nine and a former cast member of Saturday Night Live—then hailed this year’s event for recognizing diversity.

“This is the most diverse group of nominees in Emmy history,” he said, then quipping: “So congratulations Hollywood, you did it. Yeah, racism is over.”