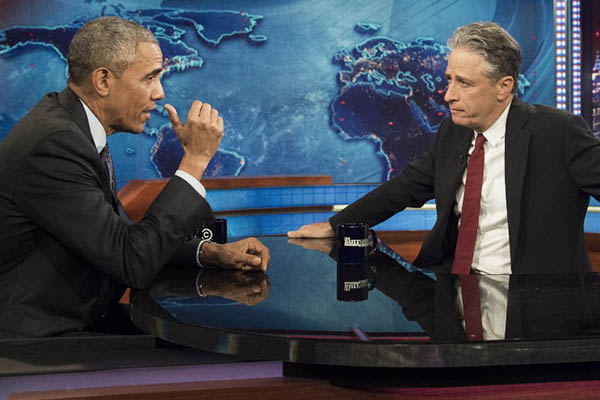 Not even Barack Obama wants to see him go. But after informing and entertaining American viewers for 16 years, Jon Stewart will present his final episode of The Daily Show on Thursday.

The content and guests on the last program on Comedy Central are a closely guarded secret, but it is scheduled to last an hour, twice as long as normal.

“Let me make something clear, I’m not dying,” joked Stewart last week as fans wondered how they could follow a new presidential race without him slamming the candidates four nights a week.

The native New Yorker, 52, funny, pitiless and firmly left of center, is a unique voice in American broadcasting, and one that intersects politics, journalism and entertainment. The Daily Show rakes over the day’s news, political headlines and oddities to poke fun and make serious points, often mocking the sensationalist coverage of television networks, such as Fox News and CNN. Guests are normally submitted to a barrage of questions.

It is watched by around 1.3 million Americans a day, and hundreds of thousands of others watch online, particularly the young who are disenchanted with politics and don’t watch TV news. Some see Stewart as a rock in times of crisis. “The comic who became a conscience,” wrote the Daily News on Monday. “Why John Stewart might be irreplaceable,” headlined Variety magazine.

He was there after the September 11, 2001 attacks, incapable of holding back tears and asking viewers: “Are you OK?”

When George W. Bush was first elected president in 2000, he renamed the controversial recount in Florida, “Indecision 2000.” His criticism of the war in Iraq, almost alone in the media at the time, fanned doubts about the 2003 U.S.-led invasion.

In June, with the utmost seriousness, he condemned the “terrorist attack” on a black church in Charleston and denounced the continued flying of the Confederate flag.

His political guests see him as a platform to reach a younger audience. But they never get an easy ride. “Can you ever not disappoint us?” he asked of Nancy Pelosi, the Democratic minority leader in the Senate in 2014. “Whose team are we on in the Middle East? Who are we bombing?” he asked Obama during the president’s last appearance on July 21.

“How could the U.S. not be there?” he asked when the American president nor the secretary of state went to Paris to take part in an international march in January against the Charlie Hebdo killings.

Over the years, his critics have assailed him. Fox News alleged last week that Stewart had had two “secret” meetings at the White House with Obama in 2011 and 2014. Stewart ridiculed the idea they were secret.

“We spent about five to seven minutes with Obama kind of scolding me not to turn young Americans cynical, and I spent five to seven minutes explaining to him I am actually skeptically idealistic,” he said. “Was the President of the United States trying to influence or intimidate or flatter me?” Stewart asked. “My guess is, uhh-huh. Did it work? Might’ve.”

So what will he do after The Daily Show, which in September will return with new host, the South African comic Trevor Noah?

In February, he said he wanted a more flexible schedule, citing a desire to spend more time with his children, aged nine and 11. After directing the 2014 film Rosewater, adapted from a memoir by Canadian-Iranian journalist Maziar Bahari, he did not rule out returning to the world of stand-up comedy, where he started in the 1980s after getting a degree in psychology.

The Daily Show has won 22 Emmy awards and two Peabody Awards. It has also been a springboard for new talent, launching the television careers of comedians such as Stephen Colbert and Steve Carrell.