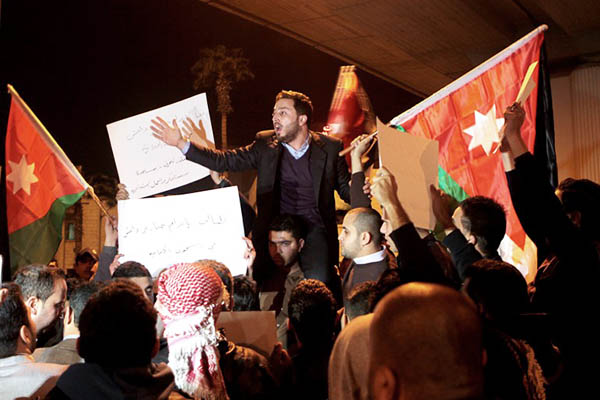 Jordan executed two death-row Iraqi jihadists, including a woman, on Wednesday after vowing to avenge the burning alive of one of its fighter pilots by the Islamic State group.

Would-be suicide bomber Sajida al-Rishawi and Al Qaeda member Ziad al-Karboli were hanged before dawn at a prison south of the capital, the government said. Jordan had promised to begin executing Islamic extremists on death row in response to the murder of Muath al-Kaseasbeh, who was captured by I.S. when his plane went down in Syria in December.

Jordan’s King Abdullah II cut short a visit to Washington after a gruesome video of the airman’s killing emerged, describing Kaseasbeh as a hero and vowing to take the battle to I.S.

Egypt-based Al-Azhar, Sunni Islam’s most prestigious seat of learning, called for the “killing, crucifixion or chopping of the limbs” of I.S. militants, expressing outrage over their “cowardly act.”

Rishawi, 44, was sentenced to death for her participation in triple hotel bombings in Amman in 2005 that killed 60 people. I.S. had offered to spare Kaseasbeh’s life and free Japanese journalist Kenji Goto—who was later beheaded—if she were released.

Jordan had on Tuesday vowed to avenge the killing of Kaseasbeh, hours after the harrowing video emerged online purporting to show the caged 26-year-old F-16 fighter pilot engulfed in flames. The video—the most brutal yet in a series of recorded killings of hostages by I.S.—prompted global revulsion and vows of unwavering international efforts to combat the extremist group. The killing sparked outrage in Jordan and demonstrations in Amman and the city of Karak, the home of Kaseasbeh’s influential tribe.

Rishawi was closely linked to I.S.’s predecessor organization in Iraq and seen as an important symbol for the jihadists. Karboli was sentenced to death in 2007 on terrorism charges, including the killing of a Jordanian in Iraq.

Jordan, a crucial ally of Washington in the Middle East, is one of several Arab countries that have joined a U.S.-led coalition carrying out airstrikes against I.S. in Syria and Iraq.

The New York Times, quoting U.S. officials, reported Wednesday that the United Arab Emirates had suspended its participation in December after Kaseasbeh’s capture due to fears for the safety of its pilots. There was no official confirmation of the report.

U.S. President Barack Obama, who hosted King Abdullah in a hastily organized Oval Office meeting, led international condemnation of the murder, decrying the “cowardice and depravity” of I.S. He said the brutal killing would only strengthen international resolve to defeat the extremists. British Prime Minister David Cameron, who has sent warplanes to join the U.S.-led strikes against I.S. in Iraq, denounced “the sickening murder.”

“We will not stop until these evil extremists and their poisonous ideology are defeated,” he added.

The opposition Syrian National Coalition offered condolences for the execution of the airman “whose blood mingled with the soil of our beloved Syria.”

Kaseasbeh was captured in December when his jet crashed over northern Syria on a mission that was part of the coalition air campaign against the jihadists. Jordanian state television suggested he was killed on Jan. 3, before I.S. offered to spare his life and free Goto in return for Rishawi’s release.

The highly choreographed 22-minute video released Tuesday shows Kaseasbeh at a table recounting coalition operations against I.S., with flags from the various Western and Arab countries in the alliance projected in the background. It then shows Kaseasbeh dressed in an orange jumpsuit and surrounded by armed and masked I.S. fighters in camouflage. It cuts to him standing inside a cage and apparently soaked in petrol before a masked jihadist lights a trail of flame that runs to the cage and burns him alive.

Saudi Arabia, the spiritual home of Islam and another member of the coalition, condemned the “misguided ideology” behind Kaseasbeh’s killing and accused groups like I.S. of seeking “to distort the values of Islam.” The U.A.E. said the actions of I.S. “represent epidemics that must be eradicated by civilized societies without delay.” Iran condemned the “inhuman and un-Islamic act.”

Shiraz Maher, from the International Center for the Study of Radicalization at King’s College, London, described the latest footage as “simply the most horrific, disgusting thing I have seen from Islamic State in the last two years.”

I.S. has seized swathes of territory in Syria and Iraq and last year declared a “caliphate” in areas under its control, imposing its brutal interpretation of Islam and committing widespread atrocities. Kaseasbeh was the first serviceman from the coalition captured since it launched strikes against I.S. last year.

The Jordan Times said in an editorial that the country would rally against the “ruthless” murder of the pilot “who is now the son of all Jordanians.”