Jordan Hits Back at I.S. After Pilot Murder 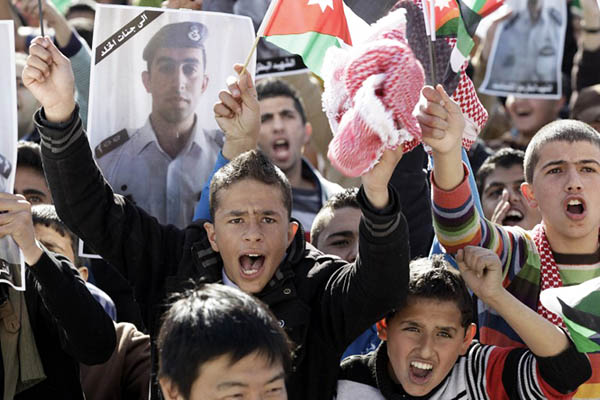 American jets provided security to Jordanian planes as they launched new round of airstrikes.

Jordan said its warplanes launched dozens of new strikes Thursday against the Islamic State group, after vowing a harsh response to the burning alive of a pilot captured in Syria.

The news came as scores of people were killed when rebels unleashed rocket fire on Damascus and President Bashar al-Assad’s forces retaliated. Jordan’s military said “dozens of jet fighters” struck I.S. targets on Thursday morning, “hitting training camps of the terrorist groups as well as weapons and ammunition warehouses.” It did not say where the targets were located—I.S. holds swathes of Syria and Iraq—but said they were destroyed and the aircraft returned home safely.

I.S. have released a highly choreographed video of the horrifying murder of pilot Muath al-Kaseasbeh, whose death has sparked grief and deep anger in Jordan. Jordan’s military has pledged to “destroy this terrorist group and kill the evil in its own place,” saying it would punish I.S. for the “heinous act” of burning him alive.

King Abdullah II visited the airman’s family, which has urged the government to “destroy” the jihadists, to pay his condolences.

Jordan has conducted regular raids against I.S. across the border in Syria as part of a U.S.-led campaign against the Sunni extremist group. More than 200,000 people have died since anti-government protests erupted in Syria in early 2011, escalating into a multi-sided civil war that brought jihadists streaming into the country.

At least 66 people, including 12 children, were killed by regime airstrikes and shelling on rebel areas around Damascus on Thursday, according to the Syrian Observatory for Human Rights. The assault on the Eastern Ghouta region came after rebels fired more than 100 rockets at the city, killing 10 people including a child, the Britain-based group said.

The gruesome murder of Kaseasbeh, captured by I.S. in December after his F-16 crashed in Syria, has increased support in Jordan for stepped-up military action against the jihadists. “Jordan will wage all-out war to protect our principles and values,” government newspaper Al-Rai wrote in an editorial.

The execution has sparked outrage in Jordan and protests in Amman and Karak, bastion of Kaseasbeh’s influential tribe. Solidarity demonstrations with the family are planned for nationwide after Friday’s weekly prayers.

Abdullah cut short a U.S. visit and returned to Amman on Wednesday after the video of Kaseasbeh’s killing emerged. “The blood of martyr Muath al- Kaseasbeh will not be in vain and the response of Jordan and its army after what happened to our dear son will be severe,” he said afterwards.