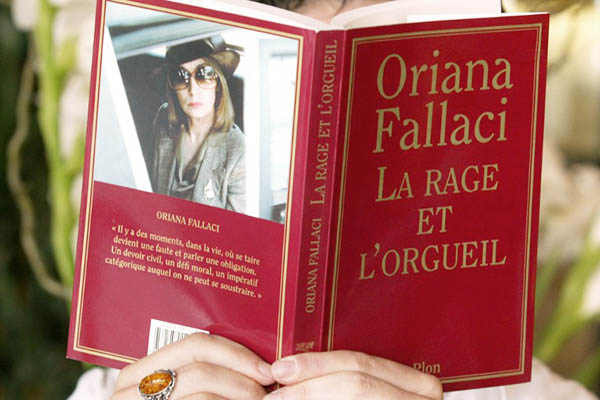 The infamous interviewer’s biography has been turned into a two-part drama in Italy.

The turbo-charged life of one of Italy’s most celebrated—and controversial—female journalists has been turned into a television film.

L’Oriana, a two-part drama produced by public broadcaster RAI, hits the small screen in Italy this week, introducing a new generation to the life, loves and adventures of Oriana Fallaci, who joined Italy’s anti-fascist resistance movement in World War II then went on to become a war correspondent, author and a famously provocative interviewer and polemicist.

Born in Florence in 1929, Fallaci died in 2006, her final years having been overshadowed by controversy over her diatribes against Islam in the aftermath of the September 11, 2001 attacks on New York, where she latterly lived for part of the year.

Years earlier, she had made waves by ripping off her chador during an interview with the Ayatollah Ruhollah Khomeini, leader of Iran’s 1979 Islamic revolution, to protest over the requirement for women to be veiled.

Vittoria Puccini, who plays her in the film, added: “We tried to portray Oriana the journalist, the war correspondent … but also her human, more intimate and sometimes more fragile side, which was revealed in her relationships with men.”

Fallaci had two great loves in her life: French journalist Francois Pelou, whom she met in Vietnam where he was AFP’s bureau chief, and Alexandros Panagoulis, a Greek anarchist and poet who was a leading figure in the fight against the “Colonels” military junta and was to die in a car crash in 1976 three years after they met. She told the story of their tumultuous relationship in her novel A Man

Fallaci’s first steps in journalism involved covering Rome’s Dolce Vita set in the 1960s. But she soon changed direction, heading for Vietnam and producing a book of interviews with ordinary American soldiers.

She later applied her interviewing talent to famously long and detailed interviews with world figures such as Indira Gandhi, Haile Selassie and Henry Kissinger. After stints in Latin America and India, her final reporting mission was the first Gulf War, which lasted from 1990 to 1991.

But she enjoyed a second burst of fame in the aftermath of September 11 and her publication of a polemic entitled The Rage and the Pride. The essay was a virulent diatribe against Islam and observations including the claim that “the sons of Allah breed like rabbits” got her into trouble with the law in France and Switzerland as well as in Italy, where she was due to be sent for trial before her death from cancer.

But it appeared to strike a chord with her audience. The essay sold 700,000 copies in a month and follow-up publications charting the supposed surrender of the West to Islam did even better. That helped to convince Fallaci of the merits of her controversial stance and her love of a passionate argument: “to fight is better than to win,” she once said.

“She was a controversial, very difficult person but I really think her life story was worth telling,” said Puccini.