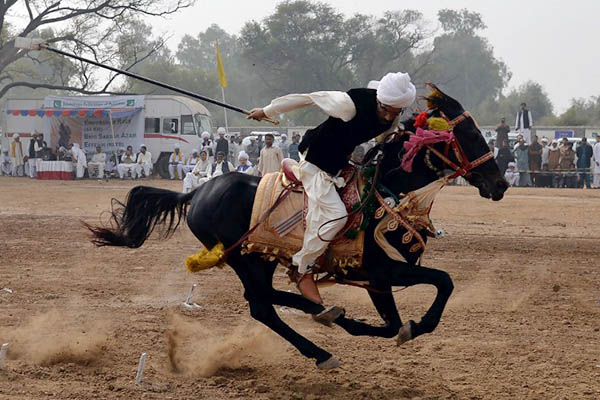 Festooned with garlands and colorful bridles, turbaned riders mounted on horseback in full gallop lower their lances at tiny wooden blocks as they practice the centuries-old tradition of tent-pegging in Pakistan.

Less than a two-hour drive from the capital Islamabad, thousands gather at a freshly ploughed grounds to watch the equine festival in a competition that can see riders tossed from their mounts, breaking bones or worse during the dangerous spectacle.

Tent-pegging competitions have been held in the subcontinent for hundreds of years but now have largely been reduced to the odd festival, with Pakistan’s most populous Punjab province hosting the majority of such events.

Diehard fans of the cavalry sport worry that the tradition is on its last legs, in the absence of official support and a lack of popularity among the young, urban Pakistani masses. But in northern Punjab’s Kot Fateh Khan, fans show up droves to cheer on the brazen riders, decked out in pristine white tunics and multi-colored waistcoats on freshly polished saddles.

As announcers wail into microphones, riders with lances spur their steeds into a sprint toward small wooden blocks wedged in the earth, aiming to pierce the targets with their jousts.

“This festival has taken place from the 18th century,” Malik Atta Muhammad Khan tells AFP after taking a stab at a wooden block from horseback. Khan, who claims his great, great grandfather “eight generations back” once ruled Kabul, says over one thousand horses will participate at the week-long festival.

But despite the abundance of horses, participants fear their beloved sport is in dire need of fresh blood, as the number of breeders raising steeds and riders training for the competition continues to wane nationwide. “The love of breeding horses has been… reduced to a few families,” says Haroon Bandial, a World Cup gold medalist. “Tent pegging is played a lot in Punjab, but it’s limited to only three to four families in KPK [Khyber-Pakhtunkhawa], a couple of families in Balochistan and in Sindh also one family or so,” he adds, citing the enormous cost of raising horses as a barrier to entry.

Aficionados of the sport say they begin training the horses at 16 months of age, a process which can take over two years to complete, while riders need at least three years in the saddle to prepare.